pollen, minute grains, usually yellow in color but occasionally white, brown, red, or purple, borne in the anther sac at the tip of the slender filament of the stamen of a flowering plant or in the male cone of a conifer. The pollen grain is actually the male gametophyte generation of seed plants (see reproduction). Inside the anther, pollen mother cells divide by meiosis to form pollen grains whose nuclei contain half the number of chromosomes characteristic of the parent plant. Each pollen grain contains two sperm nuclei and one tube nucleus. After successful pollination, the pollen germinates on the surface of the stigma of the pistil and produces a tube that grows down through the style to an ovule inside the ovary at the base of the pistil. The sperm nuclei are then discharged into the ovule; one fuses with the egg nucleus (see fertilization) and the other fuses with the polar nuclei to form endosperm (food-storage tissue) that in many cases nourishes the developing embryo in the seed. This process is basically similar in the conifers, except that in conifers there is no double fertilization and there may be a season's lapse between pollination and fertilization (see cone). Pollen grains, like sperms, are always produced in much greater quantities than are actually used, particularly by those plants that rely on the wind for pollination (e.g., grasses and conifers). Often clouds of dustlike pollen can be seen floating from wind-pollinated trees. Plants pollinated by insects and birds usually have sticky pollen and conspicuous flowers with colorful petals that often secrete perfume or nectar or both to attract the agents. Although pollen grains are microscopic in size and are thus visible to the human eye only in quantity, they are so diversified in appearance that plants are often identifiable by their pollen alone, e.g., by pathology. The waxy outer covering (which contains proteins and sugar—an additional attraction to pollen-gathering insects) is marked by characteristic patterns of ridges, spines, and knobs and is capable of expanding and contracting in the presence of moisture or dryness. Pollen grains are also remarkable for the length of the tubes some must produce: corn pollen tubes may grow 8 or 10 in. (20.3–25.4 cm) from the stigmas through the filamentous styles (commonly called “silk”) to the ovaries. The life span of pollen may be less than two hours; its ability to produce the allergic reaction of hay fever continues indefinitely.
The Columbia Electronic Encyclopedia™ Copyright © 2022, Columbia University Press. Licensed from Columbia University Press. All rights reserved.

The small male reproductive bodies produced in the pollen sacs of seed plants (gymnosperms and angiosperms).

On maturation in the pollen sac, a pollen grain may reach 0.00007 mg as in spruce, or less than 1/20 of this weight. A grain usually has two waxy, durable outer walls, the exine, and an inner fragile wall, the intine. These walls surround the contents with their nuclei and reserves of starch and oil.

Pollen identification depends on interpretation of morphological features. Exine and aperture patterns are especially varied in the more highly evolved dicots, so that recognition at family, genus, or even species level may be possible despite the small surface area available on a grain (Figs. 1 and 2). Since the morphological characters are conservative in the extreme, usually changing very slowly through geologic time, studies of fine detail serve to establish the lineal descent of many plants living today. See Palynology 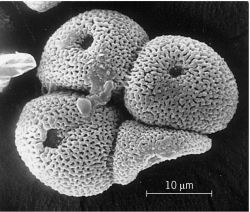 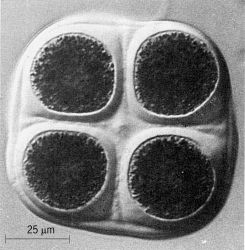 Extreme variations in size may occur within a family, but pollen grains range mainly from 24 to 50 micrometers, with the dicot range being from 2 μm in Myosotis to 250 μm in Mirabilis; the monocots range from about 15 to 150 μm or more in the ginger family, with eelgrass (Zostera) having pollen measuring 2550 × 3.7 μm in a class of its own; living gymnosperms range from 15 μm in Gnetum to about 180 μm in Abies (including sacs), while fossil types range from about 11 μm (one-furrowed) to 300 μm.

Most grains are free (monads) though often loosely grouped because of the spines or sticky oils and viscin threads. Compound grains (polyads) are richly developed in some angiosperm families, commonly occurring in four (tetrads), or in multiples of four up to 64 or more.

In most microspores (pollen and spore) the polar axis runs from the inner (proximal) face to the outer (distal) face, as oriented during tetrad formation. The equator crosses it at right angles. Bilateral grains dominate in the gymnosperms and monocots, the polar axis usually being the shorter one, with the single aperture on the distal side. On the other hand, almost all dicot pollen is symmetrical around the polar axis (usually the long axis), with shapes ranging mainly from spheroidal to ellipsoidal, with rounded equatorial outlines, and sometimes “waisted” as in the Umbelliferae. Three-pored grains often have strikingly triangular outlines in polar view.

Rarely lacking, the flexible membranes of apertures are sometimes covered only by endexine. They allow for sudden volume changes, as for the emergence of the germ tube. They are classified as furrows, with elongate outlines, and pores usually more or less circular in shape. Short slitlike intermediate forms occur. A few families have no apertures, some as a result of reduction of exine as an adaptation to wind- or water-pollination. Gymnosperms may also lack openings, or have one small papilla; most have one furrow, or a long weak area.

Few pollen grains are completely smooth (psilate) at ordinary magnifications; most have sculpture both on the surface and the structure below it. See Flower, Pollination, Reproduction (plant)

the aggregate of pollen grains of seed plants. Pollen is rich in nutritive substances (sugars, fats, mineral salts, and proteins), which are depleted as the pollen grains sprout. It also contains enzymes, carotenoids, vitamins, and other biologically active substances that play an important role in fertilization. Pollen is used by bees to make beebread. The viability of the pollen of various species of plants differs. For example, the pollen in lilies retains its fertilizing power for 60 to 65 days; in corn, however, it is viable for no more than two days. Various methods of storing pollen for use in artificial pollination have been developed.

a fine powdery substance produced by the anthers of seed-bearing plants, consisting of numerous fine grains containing the male gametes