an organic compound containing several condensed benzene rings, no fewer than two carbony 1 groups, = O, frequently heterocycles, and atoms and groups of CI, Br, OCH3, NH, NHAc (Ac is an acid radical). Polycyclic dyes are divided into several classes (acylamin oanthraquinone, an-thraquinonimine, and so on) according to chemical structure. Polycyclic dyes are grouped with vat dyes.

Indanthrene, or indanthrone (CI Vat Blue 4), the first polycyclic dye, was obtained in 1901 and has the following structure: 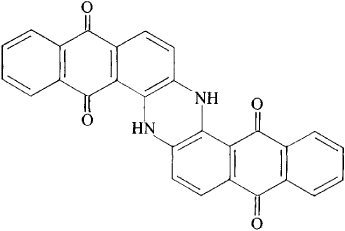 Polycyclic dyes, which are made in all colors except bright red, are the fastest dyes for cotton and other cellulose fibers. Certain polycyclic dyes are insoluble in water and serve as pigments in dyeing rubbers and plastics; they are also used in the paint and varnish and printing industries. Polycyclic dyes are usually obtained from anthraquinone derivatives by acylation, condensation, and other reactions (in organic solvents or concentrated sulfuric acid at elevated temperatures, sometimes by fusing reagents, often with catalysts).