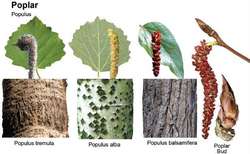 (poplar), a genus of plants of the family Salicaceae. The plants are dioecious deciduous trees reaching 40–45 m in height and having trunks measuring as much as 1 m across. The variously shaped leaves are petioled and alternate. The flowers, which are located in the bracteal axils, are dentate or dissected into filamentous lobes. They consist of a cup- or saucer-shaped disk, which bears a pistil (in pistillate flowers) or numerous stamens (in staminate flowers). The flowers are gathered into drooping catkins, which appear before or simultaneously with the opening of the leaves. Pollination is by wind. The fruit is a capsule with numerous tiny, hairy seeds, which are scattered by the wind.

There are more than 100 poplar species (according to other data, 35 to 40), distributed primarily in the temperate zone of the northern hemisphere. Poplars are found as far south as Tanzania, Uganda, and northern Mexico. The USSR has about 30 species, 12 of which have been introduced. Many poplar species are ornamental, grow rapidly, and can be propagated vegetatively by cuttings and root suckers. For this reason, they are often used in landscaping. Cultivated species include the tacamahac (P. balsamifera), the abele (P. alba), the Mongolian poplar (P. suaveolens), the cottonwood (P. deltoides), the black poplar (P. nigra), the European aspen (P. trémula), and the Lombardy poplar (P. pyramidalis). A number of hybrids are also cultivated.

Poplar wood is lightweight, white, and soft. It is used in the manufacture of paper and matches, in construction work, and in the production of plywood, crates, and other items.

Feedback
Flashcards & Bookmarks ?
Please log in or register to use Flashcards and Bookmarks. You can also log in with
Flashcards ?
My bookmarks ?
+ Add current page to bookmarks
Mentioned in ?
References in periodicals archive ?
The present study, therefore, attempts to examine effects of two strains of white rot fungi (Phanerochaete chrysosporium and Pleurotus ulmarius) on rumen degradability and chemical composition of Populus nigra sawdust as a nutritional source for ruminant.
EFFECT OF FUNGAL TREATMENT ON RUMEN DEGRADABILITY AND CHEMICAL COMPOSITION OF POPULUS NIGRA SAWDUST AS LIGNOCELLULOSIC BIOMAS
Populus nigra clonality occurs in several forms [26]: (1) ramets originated from root suckers and representing small compact groups and (2) distant, separated by up to 19 km, identical (by five SSR loci) genotypes appeared evidently due to downstream dispersal of vegetative tree fragments by Garonne River.
Molecular Identification and Karyological Analysis of a Rampant Aspen Populus tremula L
Economic analysis of industrial agroforestry: Poplar (Populus deltoids) in Utter Pradesh India.
Determining appropriate poplar clone and rotation length economically
"Populus weren't working on our cooling technology.
Qatar promises to 'cool temperatures' for fans during 2022 'summer' World Cup
He accessed the Graduates for Business scheme and was linked with Populus Select, which has offices in Darlington, London and Canada.
Graduates boost firms for future
The survey by Populus for The Times newspaper found almost half, 49 percent of the chosen sample, wanted a referendum immediately while a further third, 33 percent, believed there should be one "in the next few years".
Majority of Britons favor referendum on EU -- poll
The bipartisan Better Ethics Now Committee is seeking 62,500 signatures to place on the ballot a measure pro-posed by Regnat Populus 2012.
For: ethics, the good kind
The scientific interest in trees of the genus Populus has steadily increased since it began during the 1920s while their commercial importance in forestry has waxed and waned.
Genetics, genomics and breeding of poplar
Anxiety about finances is set to hit takings at the tills, with about a third (35 per cent) of those polled in a new Populus survey saying they also plan to spend less on food.
Parents 'to spend less on Christmas presents'
Rincon & Associates, a market research firm that specializes in expanding the cultural intelligence of organizations through research and teaching, recognized these challenges in the design of Populus USA.
Rincon & Associates Introduces New iPhone App Brings Census Data to Your Fingertips