One of a class of cyclic compounds in which the parent macrocycle consists of four pyrrole-type units linked together by single carbon bridges. Several porphyrins with selected peripheral substitution and metal coordination carry out vital biochemical processes in living organisms. Chlorins, bacteriochlorins, and corrins are related tetrapyrrolic macrocycles that are also observed in biologically important compounds.

The complexity of porphyrin nomenclature parallels the complex structures of the naturally occurring derivatives. Hans Fischer used a simple numbering system for the porphyrin nucleus and a set of common names to identify the different porphyrins and their isomers. A systematic naming based on the 1–24 numbering system for the porphyrin nucleus was later developed by the International Union of Pure and Applied Chemistry (IUPAC) and the International Union of Biochemistry (IUB), and this system has gained general acceptance. The need for common names is clear after examination of the systematic names; for example, protoporphyrin IX has the systematic name 2,7,12,18-tetramethyl-3,8-divinyl-13,17-dipropanoic acid. 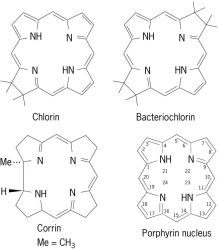 The aromatic character (hence stability) of porphyrins has been confirmed by measurements of their heats of combustion. In addition, x-ray crystallographic studies have established planarity of the porphyrin macrocycle which is a basic requirement for aromatic character.

Most metals and metalloids have been inserted into the central hole of the porphyrin macrocycle. The resulting metalloporphyrins are usually very stable and can bind a variety of small molecules (known as ligands) to the central metal atom. Heme, the iron complex of protoporphyrin IX, is the prosthetic group of a number of major proteins and enzymes that carry out diverse biological functions. These include binding, transport, and storage of oxygen (hemoglobin and myoglobin), electron-transfer processes (cytochromes), activation and transfer of oxygen to substrates (cytochromes P450), and managing and using hydrogen peroxide (peroxidases and catalases). See Cytochrome, Hemoglobin

Porphyrins and metalloporphyrins exhibit many potentially important medicinal and industrial properties. Metalloporphyrins are being examined as potential catalysts for a variety of processes, including catalytic oxidations. They are also being examined as possible blood substitutes and as electrocatalysts for fuel cells and for the electrochemical generation of hydrogen peroxide. The unique optical properties of porphyrins make them likely candidates for photovoltaic devices and in photocopying and other optical devices. A major area where porphyrins are showing significant potential is in the treatment of a wide range of diseases, including cancer, using photodynamic therapy.

a pigment that is widely distributed in plants and animals. Its basic molecular structure is composed of porphin and characterized by four pyrrhole rings (see formula). 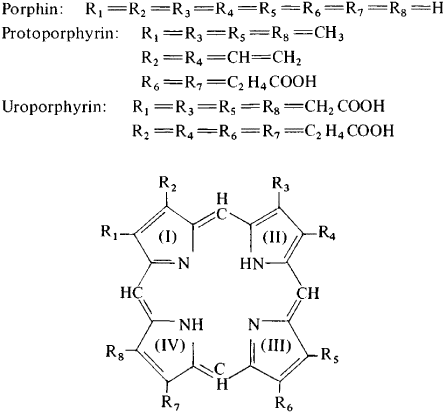 Natural porphyrins are differentiated by substituents (R). The most widely occurring substituents include the methyl (CH3), ethyl (C2H5), and vinyl (CH=CH) groups, as well as acetic (CH2COOH) and propionic (C2H4COOH) acid radicals. Porphyrins exhibit characteristic absorption and fluorescence spectra, which facilitate their identification. The porphyrin complexes formed with the metals Fe and Mg are of great biological importance; for example, the red pigments that occur in blood and muscle and that transport oxygen (hemoglobin and myoglobin) contain the Fe-porphyrin complex known as heme. Analogous complexes contain cytochromes, which act as universal biochemical electron transporters, and also the enzymes catalase and peroxidase. Chlorophylls are the green pigments in plants. They contain Mg-porphyrin complexes, while vitamin B12 (cobalamin) is a Co-complex compound similar to porphyrins. The isotopic tracing method is used to demonstrate porphyrin biosynthesis both in animal cells, which results in the formation of hemoglobin, and in plant cells, which results in the formation of chlorophyll. Succinic acid (in the form of succinyl coenzyme A) and glycine first condense to form the first precursor of heme and chlorophyll δ-aminolevulinic acid, which is then replaced by the further intermediates porphobilinogen and protoporphyrin.

Porphyrins occur in animal excretions (uroporphyrin in urine and coproporphyrin in feces), in bird eggshells and feathers, and in mollusk shells. They are also found in bitumen and organic mineral fossils (often in complexes with V and Ni) and in petroleum. The abiogenic formation of porphyrins is associated with the course of chemical evolution. Disorders in porphyrin metabolism, including congenital disorders, induce the development of various forms of porphyria in humans.

[′pȯr·fə·rən]
(biochemistry)
A class of red-pigmented compounds with a cyclic tetrapyrrolic structure in which the four pyrrole rings are joined through their α-carbon atoms by four methene bridges (=C‒); the porphyrins form the active nucleus of chlorophylls and hemoglobin.
McGraw-Hill Dictionary of Scientific & Technical Terms, 6E, Copyright © 2003 by The McGraw-Hill Companies, Inc.