(pôrtkŭl`ĭs), grating or framework of strong bars of wood or iron, sharp-pointed at their lower ends, sliding vertically in the grooved jambs of a fortified portal as a protection in case of assault. First used in Roman times against Hannibal, the portcullis reached its highest development in the 12th cent. as a characteristic feature of the defensive system of a castle or fortified town. It could be dropped suddenly in a surprise attack. Through its grating the defenders could keep up a fire of arrows and other missiles. In the 14th cent., with the development of gunpowder, its tactical value was reduced.
The Columbia Electronic Encyclopedia™ Copyright © 2013, Columbia University Press. Licensed from Columbia University Press. All rights reserved. www.cc.columbia.edu/cu/cup/ 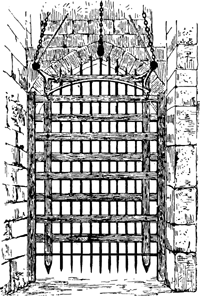 portcullis
A defensive grating, of massive iron or timber, movable vertically in retaining grooves cut in the jambs of a fortified gateway.
McGraw-Hill Dictionary of Architecture and Construction. Copyright © 2003 by McGraw-Hill Companies, Inc.

an iron or wooden grating suspended vertically in grooves in the gateway of a castle or fortified town and able to be lowered so as to bar the entrance
Collins Discovery Encyclopedia, 1st edition © HarperCollins Publishers 2005