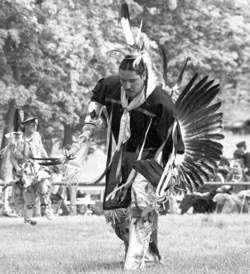 Feedback
Flashcards & Bookmarks ?
Please log in or register to use Flashcards and Bookmarks. You can also log in with
Flashcards ?
My bookmarks ?
+ Add current page to bookmarks
Mentioned in ?
References in periodicals archive ?
On Thursday, March 7, under the heading of 'Delving into the vast realm of Earth's wildlife', day two of the Pow-Wow will examine the issues and challenges arising from wildlife observation in tourism.
Adventure Travel And Social Responsibility At ITB Berlin
Theresa May's Government could fall apart on Friday at her Chequers pow-wow if warring Cabinet ministers cannot fudge their differences.
Alex on a comeback; RECORD View
Miyo Kekisepa, Make A Stand: Pow-Wow Songs Recorded Live at Red Mountain is from 7-time Grammy nominee Northern Cree, a group known for their Pow-Wow and Round Dance singing, and their commitment to their Cree culture, language, and traditions.
Miyo Kekisepa, Make A Stand
In The Last Pow-Wow, by That Native Thomas and Steven Paul Judd, a Native American baby is born with powwow regalia growing out of his skin.
That Native Thomas and Steven Paul Judd. The Last Pow-Wow
Sauces close to Jim say he'll now visit Henderson's for a pow-wow. Over shepherd's pie with Hendo's perhaps.
Cracking the whip
Birmingham authors Charlie Hill and Andy Killeen launched the Pow-Wow Litfest three years ago after chatting about the idea in Moseley's Prince of Wales pub.
Festival boasts the Wow factor
So, it seemed the ideal venue for a literary festival, as Charlie Hill, co-founder of Pow-Wow Litfest explains: "One of the strangest things, perhaps, is that it took so long for someone to come up with the idea, given that Moseley is Birmingham's most book-friendly suburb.
Literary event aims to inspire and support local writers; A literary festival in a pub seems inspired, especially when the pub is reputed to have once BEENTOLKIEN's local. Louise Palfreyman reports
Five meetings were held throughout last season including a "Pow-Wow in the Park" at Greenhead.
Backing Town
Often times, urban Native American youth seek cultural activities such as attending a pow-wow or sweat lodge to feel connected to their culture.
The relevance of cultural activities in ethnic identity among California Native American youth
Paul business were also charged in an investigation that began when a man approached Terry Daniels at a pow-wow asking to buy eagle feathers.
Traditional regalia seized in raid for eagle feathers
peace has broken out at the city council, as all sides pow-wow over the cuts.
BREAKING news... . peace has [...]
The culture and history of the Confederated Tribes of Siletz Indians will be celebrated Saturday during the annual Restoration Pow-Wow at Chinook Winds Casino Resort in Lincoln City.
Buzzworthy