[′pau̇·ər ‚fəŋk·shən]
(mathematics)
A function whose value is the product of a constant and a power of the independent variable.
(statistics)
The function that indicates the probability of rejecting the null hypothesis for all possible values of the population parameter for a given critical region.
McGraw-Hill Dictionary of Scientific & Technical Terms, 6E, Copyright © 2003 by The McGraw-Hill Companies, Inc.
The following article is from The Great Soviet Encyclopedia (1979). It might be outdated or ideologically biased. 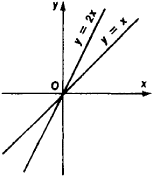 The power function is single-valued in the domain of real numbers except when a is a rational number that can be represented by an irreducible fraction with an even denominator. When a is such a rational number, the function is double-valued and assumes values equal in absolute value but opposite in sign for the same value of the argument x > 0. Only the nonnegative value of the function is generally considered in this case. For x > 0, xa is increasing if a > 0 and decreasing if a < 0.

The power function is continuous and differentiable at all points of its domain of definition except at the point x = 0 when 0 < a < 1 (continuity is preserved in this case, but the derivative becomes infinite). The derivative is given by the equation (xa)’ = axa-1. Furthermore,

These two equations hold in any interval in the domain of definition of the integrand.

Functions of the form y = cxa, where c is a constant, play an important role in pure and applied mathematics. When a = 1, such functions express a direct proportion, and their graphs are lines that pass through the origin (see Figure 1). When a = – 1, the functions express an inverse proportion; their graphs are equilateral hyperbolas whose center is at the origin and whose asymptotes are the coordinate axes (see Figure 2). 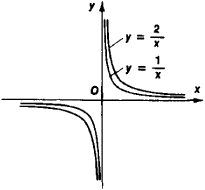 Many laws of physics are expressed mathematically by functions of the form y = cxa (see Figure 3). For example, y = ex2 expresses the law of uniformly accelerated or decelerated motion. Here, y is the distance traveled, x is the time, and 2c is the acceleration; the initial distance and speed are both 0. Suppose a is rational—that is, a = p/q, where p and q are relatively prime. Then za takes on q distinct values:

Feedback
Flashcards & Bookmarks ?
Please log in or register to use Flashcards and Bookmarks. You can also log in with
Flashcards ?
My bookmarks ?
+ Add current page to bookmarks
Mentioned in ?
References in periodicals archive ?
Figures 3 4 and 5 present the results for linear exponential and power function respectively.
RELATION BETWEEN UNIAXIAL COMPRESSIVE STRENGTH POINT LOAD INDEX AND SONIC WAVE VELOCITY FOR DOLERITE
The smart meter's third power function is its ability to safely connect and disconnect the remote customer's power during a shortage of power sources.
E-meters turn to smart relay drivers for remote grid management: relay drivers are changing the world of smart energy
For any positive integer n, the Smarandache power function SP(n) is defined as the smallest positive integer m such that n | [m.sup.m], where m and n have the same prime divisors.
On the Smarandache totient function and the Smarandache power sequence
For these continuous densities--the power function, three versions of the Weibull, two versions of the lognormal, and the gamma--the inflation of Type I error rates is as pronounced, or more so, as that of the exponential distribution.
Inflation of Type I error rates by unequal variances associated with parametric, nonparametric, and rank-transformation tests
Parabolic diffusion and power function equations (Fig.
Mineralogy and potassium release from some Western Australian soils and their size fractions
Schillig showed the Maxx, a convertible sectional with a power function similar to a hospital bed.
FASHION, FUNCTION DRIVE UPHOLSTERY
The program displays performance characteristics-in the form of OPSpecs charts, critical error graphs, and power function graphs--for various sets of QC rules.
QC Validator, Version 2.0
Once the candidate QC procedures are selected, the "options" menu in the "parameters" window is used to choose power function graphs, critical error graphs, or OPSpecs (operational process specifications) charts.
A program for assessing statistical QC procedures
The board features five Gigabit Ethernet ports that support LAN Bypass, a USB WLAN interface, four S-ATA ports for data logging or signature, serial ports for console redirection with an LCM power function, plus several other features.
Network appliance board for UTM, VPN and firewall applications
Abstract For any positive integer n, let SP(n) denotes the Smarandache power function, and 0(n) is the Enter totient function.
On the Smarandache power function and Euler totient function
Figure 5A displays the power function curves for the [1.sub.2.18s] rule ([P.sub.fr] = 0.058) and the [bar.X](2.49)/[R.sub.4s] rule ([P.sub.fr] = 0.017) for two control samples.
Quality-control (QC) performance measures and the QC planning process