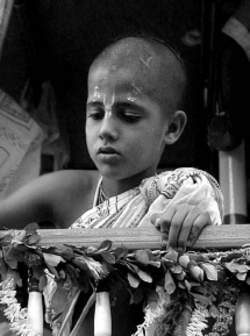 A young boy shares prasadam during the Rath Yatra Festival in Kolkata, India. Once the food is blessed by a deity, it becomes holy and may be shared with the faithful. AFP/Getty Images.

In the Hindu tradition, prasadam (literally, “the grace or mercy of God”) is food blessed by a deity and then shared with devotees and others as a temple or shrine. During various forms of worship, Hindu believers may offer items of food to the deity (or deities) who have been enshrined. As other acts of worship proceed (chanting, kirtans, etc.) the food is offered and it is believed that the deity partakes of the essential aspect of the food. The food is thus considered blessed. The officiating priest(s) may then take a portion of the offered food, the rest being returned to those who offered it. It will subsequently be shared with others and consumed. The sharing of prasadam is a popular act at any Hindu celebration, as well as regular gatherings at temples for festivals and holidays. It is especially appropriate at PILGRIMAGE sites.

In the modern West, prasadam has become widely known in non-Hindu circles from theactivity of the International Society for Krishna Consciousness (the Hare Krishna movement). This devotional association makes the production of prasadam part of its daily activity and oversees the sharing of prasadam as part of devotional and evangelical activities. The blessing of Krishna on the food carries to those who partake in it and facilitates their return to the godhead. Members of the Society are urged to offer all the food they prepare to Krishna and to eat only food that has been so offered.

The belief in prasadam underlies the Krishna Food for Life program, which is centered on the preparation and distribution of prasadam (defined as “sanctified vegetarian food”). The movement’s founder, A. C. Bhaktivedanta Swami (1896–1977), left his followers with the admonition that no one within ten miles of a Hare Krishna facility should go hungry.

Feedback
Flashcards & Bookmarks ?
Please log in or register to use Flashcards and Bookmarks. You can also log in with
Flashcards ?
My bookmarks ?
+ Add current page to bookmarks
Mentioned in ?
References in periodicals archive ?
On being asked about Kashmir being discussed at United Nations Security Council (UNSC), Prasad said, "MEA is working on this issue".
India will give befitting reply if any action taken by terrorists on Article 370: Prasad
Speaking to Gulf News over phone from India, Prasad, however, pinned a lot of hopes on the trio -- calling them a "complete package" that the rival teams should be wary of.
Indian pace trio have a challenge at hand, Prasad says
In prepared comments distributed Wednesday before the Opening Bell on Wall Street, Wilson thanked Prasad for his contributions to Townsquare over his longstanding tenure, "and in particular, his partnership over the past year as co-CEO.
Dhruv Prasad Departs Townsquare Media
Mocking Gandhi, Prasad said, 'One cannot expect anything better from someone who has become the president of the Congress purely because of his family and not because of talent or ability.'
Rahul Gandhi trying to help Pakistan: BJP
I need continuous feedback from you about how are you feeling,'" Prasad said of his discussions with the neurosurgeon, Dr Sharan Srinivasan.
Indian man strums guitar during brain surgery
" No soil was sold to the zoo," countered Lalu Prasad Yadav.
Lalu trashes BJP's benami property accusations
Dr Somdutt Prasad is a top-notch ophthalmologist, retinal specialist and eye surgeon in Kolkata heading i4vision — a modern eye care clinic.
Dr Somdutt Prasad Invited as a Moderator for the First Prof Krishnendu Sarkar Memorial Oration & CME
Editors Prasad, Prasad, Mills, and Mills present students, academics, researchers, and professionals working in a wide variety of contexts with a collection of academic papers and scholarly articles focused on contemporary research in the field of critical management studies.
The Routledge Companion to Critical Management Studies
The Making of a Modern Indian Artist-Craftsman: Devi Prasad by Naman P.
The Making of a Modern Indian Artist-Craftsman: Devi Prasad
Dr Somdutt Prasad was banned for six months after a tribunal was told of a catalogue of drinking episodes, one involving him driving the wrong way down a road, causing two cars to crash.
SURGEONIN EYE OP WAS 'UNDERTHE INFLUENCE' Tribunal bans doctor after catalogue of episodes involving booze
Movenpick Hotel Ibn Battuta Gate has appointed Dayanand Prasad as the new chef de cuisine at the Chor Bazaar restaurant.
Dayanand Prasad new chef de cuisine at Chor Bazaar