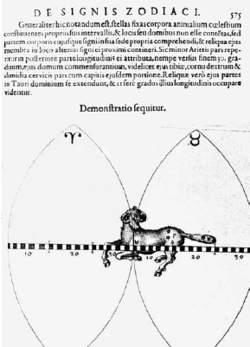 Robert Fludd’s attempt to illustrate the theory of precession. From the 1617 edition of Technica Macrocosmi Historia. Reproduced by permission of Fortean Picture Library.

The phenomenon known as the precession of equinoxes was said to have been discovered by Hipparchus in the second century b.c.e., but there is evidence that some groups of people were aware of the phenomenon much earlier. To recall some basic science, the seasons are the result of the slant of Earth’s axis: When the Earth’s hemisphere is inclined away from the Sun, this results in winter; when the hemisphere is inclined toward the Sun, this is summer. The spin of Earth makes it behave like a gyroscope (always tending to maintain the same angle), but, because Earth is not perfectly round, it tends to “wobble” a little. One result of this wobble is that each year the Sun appears to have moved ever so slightly backward (against the backdrop of the relatively unmoving stars) from where it was at the same point (e.g. at a solstice or an equinox point) the preceding year (at the rate of 1° every 71.5 years).

This precession is the reason that the tropical zodiac, which most Western astrologers use, is a “moving” zodiac: Following the admonitions of Ptolemy, the great astrologer-astronomer of antiquity, the beginning of the Zodiac—0° Aries—is located where the Sun is positioned during the spring (vernal) equinox. Thus, each year the zodiac is moved very slightly. This movement keeps the zodiac aligned with the seasons, but it is always slipping backward with reference to the stars. This is disconcerting to anyone who feels that sign influence emanates from the constellations after which the signs of the zodiac take their names. However, if one switches over to one of the sidereal zodiacs (which align the zodiac with the stars), then the zodiac—which contains much seasonal symbolism—slips out of alignment with the seasons. This means that it is possible to make a good argument for either system.

Feedback
Flashcards & Bookmarks ?
Please log in or register to use Flashcards and Bookmarks. You can also log in with
Flashcards ?
My bookmarks ?
+ Add current page to bookmarks
Mentioned in ?
References in periodicals archive ?
But, as the authors point out, what is not clear is how to precisely distinguish some of those effects, such as atmospheric temperature and climate changes, from the effects due to other sources, such as solar radiation, precession of equinoxes, nutation of the north-south Earth axis, and so forth.
The Complexity of Global Warming