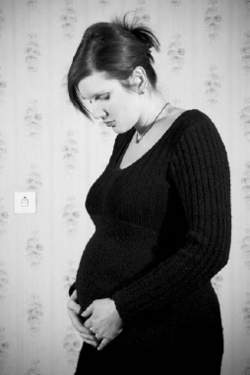 Women often worry about their pregnancies, and such fears can often reestablish themselves in the form of troubling dreams.

When one considers the abnormal levels of stress that pregnant women are under, a greater incidence of nightmares and anxiety dreams is understandable. When Patricia Maybruck conducted a survey on the dreams of pregnant women, she recorded 1,048 dreams. She found that seventy percent of these dreams were unpleasant, and of these forty percent were full-fledged nightmares. When Maybruck compared the occurrence of nightmares to the duration of labor, she found no direct correlation. However, when she looked at the tendency of some women to confront their fears in the nightmares in an assertive manner, Maybruck found that ninetyfour percent of the women who experienced a labor of less than ten hours were assertive in at least one nightmare. On the other hand, of the women who had long labors (over ten hours) seventy percent were victimized in their nightmares.

There are many people who believe in precognitive aspects of pregnancy dreams and nightmares. For instance, there are accounts of women who have reportedly dreamed of being pregnant to discover later that they actually are. Most of these reports are retrospective in nature and, while such accounts should not be discounted entirely, they can’t be used for scientific or systematic investigation. The same sort of retrospective taint also affects instances in which the diagnostic qualities of pregnancy dreams are examined. Many women have claimed to have had dreams that predicted miscarriages and still births, as well as health problems in their children. These claims, again, are suspect because they were not typically reported until after the foretold event took place.

A common theme in pregnancy dreams is the appearance of architecture as the central subject matter. This seems to be representative of the womb of the pregnant woman. Dreams of small animals are the most frequent focus of women’s dreams in the first trimester because these animals are like the fetus in many ways. Dreams of being unattractive are the most frequent in the second trimester. The second trimester is also when dreams representing unresolved parenting issues and fears of inadequacy begin to occur.

The appearance of actual babies in dreams does not become a regular occurrence until the woman enters the third trimester. Threatening dreams of robbers, intruders, fires, earthquakes and the like also become more frequent in the third trimester. These often reflect the woman’s fears concerning complications during labor and the immense task of parenting that follows. Themes of water and waterways, perhaps symbolic of amniotic fluid and birth canals, and themes of growing plants and gardens are common throughout the entire length of the pregnancy.

In general, pregnant women have more dreams that they remember than other populations that have been studied. This is due to the extreme hormonal changes they experience and their irregular sleep patterns. The imagery of these dreams has been described as being abnormally vivid, which reflects the heightened emotional state in which these women are living.

It should also be noted that expectant mothers are not the only ones who experience pregnancy nightmares. Expectant fathers also have them, although they are based entirely on emotional stress. These nightmares often reflect the concerns that face an expectant father, such as, “Will I be displaced in the mother’s affections?” or if he will be able to emotionally and financially support his growing family. Not the least of these concerns is the health of both the mother and the child.