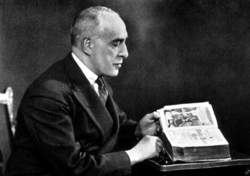 Image of Harry Price, from his book Search for Truth (1942). Price was a British psychical researcher who conducted an investigation of Borley Rectory, the “most haunted house in England.” Courtesy Fortean Picture Library.

Harry Price was a psychical researcher who founded the National Laboratory of Psychical Research in England. He was its Director and also the Foreign Research Officer of the American Society for Psychical Research. Price was an amateur stage magician and Honorary Vice President of the Magician’s Club in London. He also had some early training as an engineer. As an accomplished conjurer, he was well suited to examine mediums and psychics who might have been fraudulent. He investigated Rudi Schneider and Stella C. (Mrs. Leslie Deacon), among others.

In his examination of Rudi Schneider, Price devised a test where the medium and all the sitters (six, including Price) wore metallic gloves and shoes. Each touched the hands and feet of his or her neighbor. In front of each person was a red light bulb that remained lit as long as no one broke the circuit. If anyone were to remove a hand or foot, the light bulb would go out. Despite these precautions, Schneider produced materializations of arms and hands. Price wrote, “Never, in the recorded history of any psychic, have phenomena been witnessed under such a merciless triple control of medium and before sitters of such repute.” Stemman said, “Price’s extensive notes on this series of séances constitute one of the most impressive documents on physical mediumship in the history of psychical research” (The Supernatural: Spirits and Spirit Worlds, 1975). Yet despite all the precautions, in one séance Price neglected to make the electrical connections and a photograph, triggered to be taken automatically, showed Schneider with an arm free. Schneider was accused of fraud and, despite Price’s defense of him for many years, a personal quarrel developed.

Once, on a train journey, Price got into conversation with a Mrs. Leslie Deacon (who later became known as the medium Stella C.). From what she mentioned to Price, in talking—the sensation of cold breezes in closed rooms, for example—he realized that she had tremendous psychic and mediumistic potential. She agreed to be examined at Price’s National Laboratory of Psychical Research. Price developed various tools for examining psychics and mediums. One of these was a fraudproof table that he used with Stella C. It could have various musical instruments and the like placed inside a compartment which then became inaccessible by normal means. Despite this and other precautions, the musical instruments played and a bell rang during the séance. Price also used an automatic thermograph, which recorded a significant fall in temperature during sittings. It was common for him to sprinkle starch powder on the floor, to detect any foot movements if there should be any. He would also seal windows with masking tape and initial the tape.

Price conducted what has been described as the most famous ghost hunt of modern times—the investigation of Borley Rectory, on the Essex-Suffolk border of England. The Rectory is known as “the most haunted house in England.” There is a frequently reproduced photograph of the ruins of Borley, when it was being torn down, which shows a single brick that flew up and stayed in mid-air just as the camera shutter was tripped. There were many examples of poltergeist activity at the site, including writing and scribbling that appeared on walls there. Bells rang, stones and other objects flew through the air, a variety of bumps, bangs, rappings, and other sounds were heard. After Price’s death, the Society for Psychical Research (SPR) investigated Price’s investigations. They were extremely critical and all but called Price a fraud and accused him of creating some of the phenomena himself.

This was probably due to bad blood between Price and the SPR, which had existed and grown after Price founded his National Laboratory. Apparently the SPR completely ignored the fact that Borley Rectory had been haunted—and exhibiting a wide variety of phenomena—from long before the time Price began investigating it. A later review by the society’s R. J. Hastings was much more balanced and admitted that there was no evidence to show fraud on Price’s part.

Many felt that Price was too much of a publicity seeker, loving the limelight and knowing how to appeal to the media but, as Holroyd points out (The Supernatural: Minds Without Boundaries, 1975), personal profit was not his motive. He funded most of his research work himself and eventually donated the National Laboratory to the University of London, along with his personal library of 17,000 volumes.