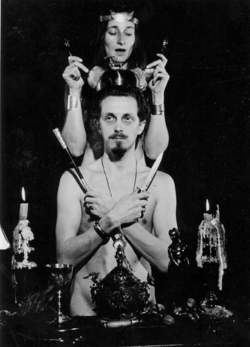 From "Presbyter," the leader of a Witchcraft coven. The priest or priestess is the one who officiates at religious and/or magical rituals. Generally, a priest or priestess is considered to be a plenipotentiary between humans and the gods. However, in Wicca, all Witches are considered to be priests and priestesses, since it is possible to worship in solitary and therefore to interact directly with deity without an intermediary. For this reason, leaders of covens are often referred to as High Priests and High Priestesses.

Among the Assyrians and Babylonians, priestly functions included magic and soothsaying. In ancient Egypt, the Pharaoh himself could perform any priestly duties. By the time of the new empire, priests wielded tremendous power, with the priesthood rapidly increasing in wealth and number. In ancient Greece the priests performed the main ritual acts, while the king was empowered to sacrifice on behalf of the people. According to Aristotle (Politics), priests were the elected officials charged with "those things which are ordained to be done towards the gods." The Roman poet Virgil (70-19 BCE) described the amazing powers of a priestess in the Aeneid: "She undertakes by her incantations to give peace to minds at will, or to fill them with heavy cares; to arrest the flow of rivers and turn back the stars in their course: she summons the nocturnal spirits: you will see the ground rumble beneath her feet; and the ash trees descend from the mountains."

Wiccan priestesses are not so powerful; in some traditions of Wicca, however (e.g. Gardnerian), the priestess is more important than the priest. A coven meeting may be led by the high priestess even when no high priest is present, yet a high priest cannot hold a coven without a high priestess. In other traditions, a priest or priestess may lead the rituals. In traditions with a degree system, the priest and priestess are designated as permanent heads of the coven, while in many nondegree traditions (e.g. Saxon, or Seax-Wica), the leadership changes at specific intervals.