the graphic form of the symbols of an alphabetic writing system. Depending on the reproduction technique used, a distinction is made between handwriting, which is produced with a pen or other implement on a soft material, such as papyrus, parchment, or paper; lettering applied by hand with a brush or other implement on signs, vases, fabric samples, original bookbindings, book covers, title pages, and other elements of publications; engraved lettering, which is cut or stamped in wood, metal, stone, or some other hard material and used for inscriptions on monuments, architectural structures, or engravings; and print, which consists of individual letters and other elements and which is designed for the manual or mechanized composition of texts to be reproduced by printing, chiefly on paper. In the narrow sense, a full set of print characters designed for composition is called a typeface.

Typefaces may be divided into seven groups depending on weight (the ratio of the width of the thick strokes to that of the thin strokes in the letters) and on the presence and shape of serifs (Figure I). A special group comprises typefaces that, because of their form, cannot be included in the groups in Figure 1, including scripts and faces that imitate the typefaces of typewriters. Depending on the form, which is determined mainly by the letters’ inclination, width (the ratio of the thickness of a stroke to the width of the counter), and weight, typefaces may be upright, cursive, or oblique; normal, condensed, or expanded; and light, medium, or bold. Typefaces of a given form are divided into different type sizes; typefaces that are different in size and form but quite similar in overall design are combined into groups, called type families. Every type family has a name, for example, Elizaveta, Bannikov, and School. The variety of type families used in printing houses in the USSR is regulated by state standards.

The design of the first typefaces was based on handwriting; examples are the Russian Manuscript Poluustav (Figure 2,a), based on Russian handwriting, and Gothic (Figure 2,b), based on Latin handwriting. The primary source of modern Russian Cyrillic typefaces is the Russian Civil typeface (Figure 2,c), which was approved by Peter the Great in 1708. The original source of modern Latin alphabet type is the Roman form (Figure 2,d), which appeared in the late 15th century during the Renaissance. Some type families that appeared as early as the beginning of the 20th century are still used in printing houses in the USSR: Literary (formerly, Latin; Figure 2,e), Elizaveta (Figure 2,f), and Academic (Figure 2,g).

The type families that have been developed in the USSR since the late 1940’s include New Standard (Figure 2,h), Bannikov (Figure 2,i), and Lazurskii (Figure 2,1), for publications of literature and art books (all based on the Civil typeface of the Petrine period and typefaces of the Renaissance); School (Figure 2,j), for textbooks in primary and secondary schools and children’s publications; Modern Newspaper, for newspapers; Journal Sans Serif (Figure 2,k), for periodicals; and Rerberg (Figure 2,m), Telingater Decorative (Figure 2,n), Bazhanov (Figure 2,o), and Kuzanian (Figure 2,p), used as display type (all based on the hand letters of contemporary artists). Editions of political, scholarly, and children’s publications, works of fiction, and textbooks are often composed in a single typeface (usually a well-established face of classic design). 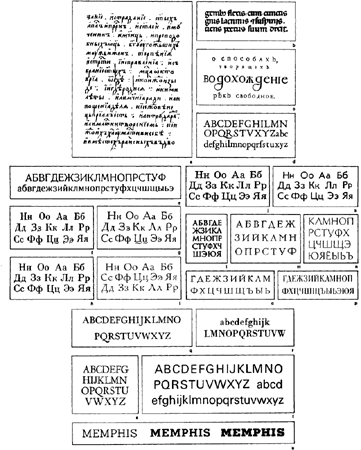 thick and thin strokes and rectangular or slab-shaped serifs), (Figure 2,u) and Beton, and sans-serif faces, such as Futura, Gill Sans, and Univers (Figure 2,t).