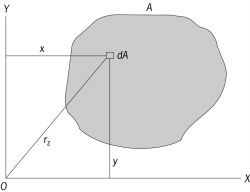 Product of inertia of an area

a quantity that characterizes the mass distribution in a body or mechanical system. Products of inertia are the sums of the products formed by multiplying the mass mk of each point of the body or system by the product of two of the coordinates xk, yk, zk of the point

The concept of the product of inertia plays an important role in the study of the rotational motion of bodies. The magnitudes of the pressure forces on the bearings on which the axial shaft of a body rotates depend on the values of the products of inertia. The pressures will be minimal—that is, equal to the static pressures—if the axis of rotation is a principal axis of inertia that passes through the center of mass of the body.

[′prä·dəkt əv i′nər·shə]
(mechanics)
Relative to two rectangular axes, the sum of the products formed by multiplying the mass (or, sometimes, the area) of each element of a figure by the product of the coordinates corresponding to those axes.
McGraw-Hill Dictionary of Scientific & Technical Terms, 6E, Copyright © 2003 by The McGraw-Hill Companies, Inc.

Feedback
Flashcards & Bookmarks ?
Please log in or register to use Flashcards and Bookmarks. You can also log in with
Flashcards ?
My bookmarks ?
+ Add current page to bookmarks
Mentioned in ?
References in periodicals archive ?
Accordingly, a full component of inertia matrix which consists of moment of inertia (MOI) and product of inertia (POI) elements needs to be considered.
Rigid Body Inertia Estimation Using Extended Kalman and Savitzky-Golay Filters
Section properties that are automatically calculated include area, perimeter, moments of inertia, product of inertia, polar moments of inertia, distance of neutral axis from extremes, radius of gyration, and section moduli.
Section property calculator. (Software Exchange)
Possibly a too cautious pragmatism, the product of inertia, impedes my ready acceptance" Indeed.
Of white heroes and old men talking (racists refuse to accept Natives' claims)