Also found in: Dictionary, Acronyms, Wikipedia.
The following article is from The Great Soviet Encyclopedia (1979). It might be outdated or ideologically biased.

the reproduction of television images on large screens having areas of 1 to 200 sq m using optical projection. It is used in television broadcasting, in education and industry, and in systems used to display information, particularly at space-flight control centers. Projection-television systems utilize, for the most part, optical magnification of the image, modulation of the luminous flux from a powerful light source, and laser techniques.

One of the most common methods used in projection television, and the first to be devised, is that of optically magnifying bright television images by transferring them from the screen of a projection kinescope onto a large screen with the aid of a mirror-lens system (Figure 1) or, more rarely, a projection lens. Modern (1975) projection kinescopes provide excellent brightness for a black-and-white image—up to 3 × 104 nits; fast projection lenses can direct as much as 30 percent of the picture tube’s luminous flux onto the screen. In order to reproduce color images on a large screen, three projection kinescopes are used with screens having red, blue, and green colors for the luminescent phosphors and three projection lenses. In the early 1970’s, equipment was also developed with a single kinescope having a striated screen consisting of luminescent phosphors of different colors. The images obtained by optical magnification have a relatively low brightness (≤15 nits) and contrast (≤1:20), which is due to the phosphors’ limited light output and the scattering of light in the glass of the kinescope screen. 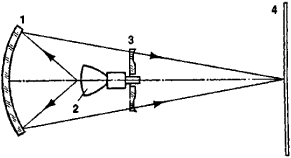 The systems of projection television based on the modulation of light (light-valve systems) are largely free of the above deficiencies. Such systems are used to reproduce both black-and-white and color images. The light sources usually used in the projection equipment of these systems (Figure 2) are powerful xenon lamps that provide a luminous flux of up to 7,000 lumens. The light source uniformly illuminates the surface of the modulator, and the television signal varies the transparency of the modulator’s light valves. As the luminous flux passes through the modulator or is reflected from the modulator, as happens in an epidiascope, it acquires information regarding the brightness of every portion of the television image. The modulated luminous flux is directed by a projection lens onto a screen. Of the available light modulators, those most often used in projection television have a deformable medium, for example, in the form of a layer of transparent, viscous oil whose surface can be deformed by the action of an electron beam that is controlled by the television signal. The light-valve systems make it possible to obtain images with linear dimensions up to 10 m.

A projection-television system is being developed in which the image is not projected from a kinescope but from a multiple-element raster.

Projection equipment that uses lasers is being developed along two different lines. One is based on the use of lasers that continuously radiate a narrow, very bright beam. By modulating the brightness of the beam with the television signal, it is possible to scan a screen with the beam using rotating mirrors; the television image is thus reproduced on the screen element by element. The other development path is based on the use of semiconductor lasers excited by an electron beam. In this case, a laser kinescope is created—a cathode-ray tube in which a semiconductor single-crystal laser mosaic serves as the basic element (Figure 3). The semiconductor lasers forming the mosaic elements of the screen serve as light sources; they are scanned

by a fine electron beam that is focused to a width of 10 to 20 microns. By applying intensity modulation to the electron beam and by developing the television image over the entire area of the mosaic screen, a bright television image can be obtained on a large screen with linear dimensions in the tens of meters as a result of the high brightness of the laser mosaic. As of the mid-1970’s, laser projection equipment has not yet been put into batch production.