[′gas ‚bər·nər]
(engineering)
A hole or a group of holes through which a combustible gas or gas-air mixture flows and burns.
McGraw-Hill Dictionary of Scientific & Technical Terms, 6E, Copyright © 2003 by The McGraw-Hill Companies, Inc.
The following article is from The Great Soviet Encyclopedia (1979). It might be outdated or ideologically biased.

a device for mixing air or oxygen with a gaseous fuel, feeding the mixture to an outlet, and igniting it there, forming a stable combustion front (fuel spray).

After the invention of the gas burner by the German chemist R. Bunsen in 1855, the consumption of fuel gases increased sharply. Fuel gases were used initially for lighting city streets; later other applications appeared. The various uses to which gas burners were put led to a variety of construction patterns and design principles. A distinction is made among diffusion, injector, double-line, combined, and gas-turbine burners. According to the pressure of the gas supplied to the burner they are classified as (1) low-pressure—up to 5 kilonewtons per square meter (kN/m2), or 0.05 kilogram-force per square centimeter (kgf/cm2); (2) medium-pressure—5-300 kN/m2, or 0.05-3.0 kgf/cm2; and (3) high-pressure—more than 300 kN/m2, or 3.0 kgf/cm2. Gas burners are also categorized by the method of burning: torch burners, in which there is partial and incomplete mixing of gas and air; and torchless burners, in which the preliminary mixing is complete.

The main components of gas burners are the mixer and the burner nozzle, which contains the stabilizing device. The components are designed in accordance with the function and operating conditions of the gas burner.

In diffusion gas burners, gas and air are fed into a combustion chamber, where they are mixed. Most diffusion gas burners are mounted on the walls of a firebox or furnace. So-called hearth gas burners which are placed inside the firebox, in its lower part, are widely used in boilers. Hearth gas burners consist of one or more gas-distribution tubes in which holes have been drilled. A tube with several holes is placed on the furnace grate or hearth in a slotted duct lined with fire brick. The required amount of air is fed through the refractory slotted duct. In such a device the combustion of the gas jets coming out of the holes in the tube begins in the refractory duct and ends inside the furnace. Hearth gas burners present low resistance to the passage of the gas; therefore they can operate without a forced blast. Diffusion gas burners typically have a more even temperature along the length of the combustion front. However, these burners require an increased coefficient of excess air in comparison with injection gas burners; they create lower heat stresses in the firebox and worse conditions for thorough combustion in the tail of the combustion front, which may result in incomplete combustion of the gas.

In injection burners, the air for combustion is sucked in (injected) by the energy of the gas flow; they are mixed inside the burner housing. Sometimes, when the pressure of the fuel gas is close to atmospheric pressure, the gas is injected by the airflow. In gas burners with complete mixing (all the air necessary for combustion is mixed with the gas), operating at medium pressure, a short combustion front forms; the combustion is completed in a minimal volume of the furnace. In injection gas burners with partial mixing, only part of the air necessary for combustion (40-60 percent; so-called primary air) is supplied and mixed with the gas. The rest of the air (so-called secondary air) is supplied to the combustion front by the atmosphere through the injection action of the gas-air streams and rarefaction in the firebox. Unlike medium-pressure injection gas burners, low-pressure burners form a homogeneous mixture of gas and air with a gas content greater than the upper ignition limit. These burners are stable in operation and have a wide range of heat load.

Stabilizers are used to ensure steady burning of the gas-air mixture in injection gas burners with high and medium pressure. These may be additional ignition torches placed around the main stream (burners with a ring-shaped stabilizer), ceramic tunnels inside which the combustion of the fuel-air mixture occurs, or plate stabilizers, which create a vortex along the flow path.

In large furnaces, injection gas burners are assembled in units of two or more burners.

Injection gas burners with infrared radiation (so-called flameless burners) are widely used. In such burners, most of the heat from combustion is transmitted as radiation, because the gas burns on a radiant surface in a thin layer and without a noticeable combustion front. A ceramic head or metal gauze may be used as the radiant surface. These burners are used to heat buildings where there is large air circulation (sports arenas, commercial buildings, and greenhouses), to dry freshly dyed surfaces (fabrics or paper), to warm frozen soil and loose materials, and in industrial furnaces. So-called panel injection radiant burners (Figure 1) are used to supply uniform heat to large surfaces, such as the furnaces of oil-refining plants, and other industrial furnaces. In such burners the mixture of air and gas proceeds from the mixer to a common duct and then through pipes that distribute the mixture to separate tunnels, where it is burned. Panel burners are small but have a wide range of settings and low sensitivity to back pressure in the furnace chamber. 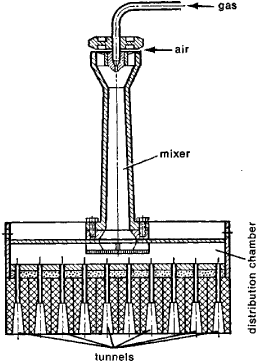 Double-line burners, in which the air needed for combustion is supplied by a blower (forced air supply), are in common use. So-called air-blast burners operate on gas under low or moderate pressure. These burners are small and are highly effective and noiseless. They can be used in furnaces with various degrees of back pressure. The gas-to-air ratio can be adjusted in these burners. To shorten the flame, the gas—and sometimes the air stream as well—is divided into separate thin streams, which are twisted at an angle to one another.

To convert operations from one type of fuel to another (especially in the winter months) or to burn several types of fuel together, combination burners are used. They may be gas-mazut or dust-gas burners. Combination burners are also used when it is necessary to create a luminous flame or when gas alone cannot provide the temperature required in a firebox. A gas-mazut burner (Figure 2) uses gas, air, and liquid and blends them in proper amounts to provide the quantities of gas, air, and mazut necessary for combustion. In a dust-gas burner operating on natural gas and heating large boilers at power stations, gas is supplied through holes on the periphery and is directed toward the center, mixing en route with a twisting stream of air. The burner is equipped with a telescopic mechanism having a screw drive; this mechanism makes it possible to constrict the tube supplying the mixture of air and dust to the firebox in boilers operating on gas fuel. The telescopic mechanism prevents dust from entering the slots between the moving and stationary parts of the tube. 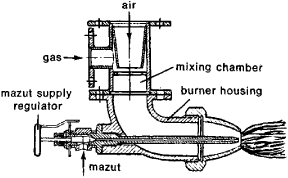 One or more holes through which a combustible gas flows and burns.
McGraw-Hill Dictionary of Architecture and Construction. Copyright © 2003 by McGraw-Hill Companies, Inc.

Feedback
Flashcards & Bookmarks ?
Please log in or register to use Flashcards and Bookmarks. You can also log in with
Flashcards ?
My bookmarks ?
+ Add current page to bookmarks
Mentioned in ?
References in periodicals archive ?
* Using a big pot and propane burner, heat several gallons of oil (enough to cover the bird completely) to 325 degrees.
Rebel yell: hear the real 'Song of the South' on Dixie's national forests
As she spoke, she adjusted a propane burner. "Sometimes I don't get the pan hot enough and they're just white," she said of the golden sole fillets browning in her skillet.
STUDENT COOKS BEAT CLOCK
Zodi claims to produce "the safest tent heaters in the world," primarily because on its three models the propane burner is set up outside the tent.
Companies pitch tent heaters
During those nights, he stayed up at the hospital and got up every few hours to fire up a high-powered propane burner for a few minutes, heating the tent from a chilly 50 degrees to a tolerable 65.
Unsung heroes made medical care possible
No more packing in heaters with the built-in BTU propane burners to keep you warm in frigid conditions.
Blinds
Students also will go outside for a demonstration of the balloon basket and its propane burners, which heat air to lift the balloon.
RE/MAX Hot Air Balloon Will Visit 4 Chicago Schools in Coming Days, Bringing Unique Educational Program to More Than 1,700 Students
We do encourage our customers to keep their original oil or propane burners intact when they add their CNG burners to protect them against sudden changes.
No pipeline? for businesses hungry for natural gas, a truck will do
"We are spending a fortune on propane burners, it is ridiculous."
Furnace worker left in the cold
With Propane burners and without the comforts of the Hyatt kitchen, he prepared a delicious chili and proved healthy food can and does taste great.
Queer Muslim activist comes to k-state
Although you can buy more expensive systems made specifically for brewing, most home-brewers cobble theirs together using old kegs, propane burners and coolers.
Home-brew 101
The other a makeshift cook tent laced with propane burners, pots, and pans.
Finally, moose! a hard week of beating the bush ends with a last-minute bull