study of mental phenomena not explainable by accepted principles of science. The organized, scientific investigation of paranormal phenomena began with the foundation (1882) of the Society for Psychical Research in London. Such early efforts attempted to dissociate psychical phenomena from spiritualism and superstition, and particularly to investigate mediums and their claims of evoking spirits or apparitions. The society also studied automatic writing, levitation, and ectoplasmic and poltergeist activities. One of its principal founders, Frederic William Henry Myers, summed up the society's early efforts in Human Personality and Its Survival of Bodily Death (1903). An American Society for Psychical Research was also founded, with James Hervey Hyslop as its leading spokesman. Considerable experimentation has been conducted, perhaps the best-known being that of Joseph Banks Rhine at Duke. The Foundation for Research on the Nature of Man, created in the early 1960s, has since replaced the Duke program. In Great Britain the work of Whately Carington and Samuel George Soal paralleled that of Rhine. The great majority of parapsychological studies have focused on the area called extrasensory perception (ESP), which includes telepathy, clairvoyance, and precognition. The popular press often reports stories that are parapsychological in nature. Many scientists criticize the claims made by parapsychologists, arguing in particular that there can be no proof of such phenomena. 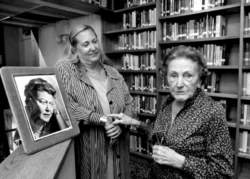 Eileen Coly, right, president of the Parapsychology Foundation, and her daughter, Lisette Coly, with a photograph of the late Eileen Garrett, founder of the foundation and mother of Eileen Coly. AP/WideWorld Photos.

According to Professor Charles Richet (1850–1935), parapsychology is “a science dealing with the mechanical or psychological phenomena due to forces that seem to be intelligent or to unknown powers latent in human intelligence.” Laurence T. Heron defined parapsychology as “a branch of psychology that deals with phenomena not explainable through data gained by the five senses.” Dr. Joseph Banks Rhine (1895–1980) said it is “the branch of science that deals with psi communications, e.g. behavioral or personal exchanges with the environment which are extrasensorimotor, not dependent upon the senses and muscles.” By “extrasensorimotor,” Rhine meant a telepathic communication between an individual and the earth, as when there is a strong feeling of an impending natural disaster.

The Encyclopedia Britannica states that the addition of the Greek prefix para to the word psychology produces a term meaning something derivative of psychology but with special reference “to those allegedly supernormal capacities of the human organism such as telepathy, clairvoyance, precognition and other not generally agreed upon functions.” The use of the word “supernormal” is unfortunate because all such “powers” are entirely normal, just uncommon. However, Ency-copedia Britannica makes the point that the “negative attitude [of many U.S. psychologists] is less characteristic of British and continental psychologists. The net evidence for the reality of ESP is approximately as weighty as that for numerous other concepts widely held by psychologists.”

The term “parapsychic” was coined by Emile Boirac (1851–1917), the psychical researcher and dean of Dijon Academy. He said it was “all phenomena produced in living beings or as a result of their actions, which do not seem capable of being entirely explained by already known natural laws and forces.” He felt that the prefix para denoted a relationship to exceptional, abnormal paradoxical phenomena. In the course of his study of human emanations, Boirac rediscovered animal magnetism. According to Nandor Fodor, “His observations on the obscure phenomena of exteriorization of sensitivity carried the researches of (Dr. Paul) Joire and (Col. Eugene) Rochas a step farther.” His book La Psychologie Inconnue (1915), translated as Our Hidden Forces (New York, 1917) and also with the title Psychic Science (London, 1918), was awarded the Emden Prize by the French Academy of Sciences.

Shepard reports, “During the 1950s and 1960s the scope of parapsychology expanded to include the range of subjects formerly covered under the term ‘psychical research,’ including Spiritualism, evidence for survival after death, clairvoyance, hauntings, poltergeists, out-of-the-body traveling (OBE), reincarnation, psychic healing and magical practices amongst primitive peoples.”

The field of parapsychology is now almost limitless, with parapsychological institutions and societies in most countries around the world. Such relatively modern phenomena as altered states of consciousness, dreams, biofeedback, Instrumental Transcommunication and Electronic Voice Phenomena have now come under the general umbrella of the word.

a field of research that studies primarily (1) the forms of sensitivity that provide means of receiving information that cannot be explained by the functioning of known sense organs, and (2) the forms of influence of a living being on physical phenomena occurring outside the body and without the mediation of muscular exertion (that is, by wishing, thinking, and so forth). Synonyms for “parapsychology” include “psychotronics,” “bioinformation,” and “biointroscopy.”

The majority of contemporary parapsychologists distinguish a number of types of sensitivity: telepathy, clairvoyance, precognition, dowsing, and paradiagnosis. Telepathy is the communication of thoughts between a sender (agent) and a receiver (percipient). Clairvoyance is the receipt of information about objective events in the external world, not based on the functioning of known sense organs or reasoned judgments. Precognition, a special type of clairvoyance, is related to the prediction of future events. In dowsing (also called the biophysical effect) underground cavities, accumulations of water, or mineral deposits are discovered with the aid of an indicator, such as a bent metallic wire or a vine. Paradiagnosis is the establishment of a medical diagnosis through clairvoyance, without contact with the patient. These forms of sensitivity are often referred to collectively as extrasensory perception.

Parapsychology also includes the classification of the forms of parapsychological influence on external physical phenomena. Psychokinesis is the mental effect of a human being on surrounding objects, such as the normal electrical activity of a plant or the position in space of various objects, usually light ones. Paramedicine, a field closely related to parapsychology, includes various inexplicable methods of treatment, such as healing by the laying on of hands or by mental suggestion (without the use of speech and without direct contact, sometimes at a great distance).

Essentially, parapsychologists have united all of these areas under one discipline on the basis of a single characteristic: all of the phenomena studied are mysterious and puzzling. To regard this as sufficient cause for establishing a special field of scientific investigation is, in principle, incorrect.

In European culture, parapsychology emerged as a discipline for systematic research and observation in 1882, with the founding in London of the Society for Psychical Research, which is still active. Subsequently, similar organizations were founded in many countries, but many of them were disbanded. Parapsychologists estimate that at the beginning of the 1970’s there were more than 240 parapsychology laboratories and societies in 30 countries, but primarily in the USA. Many of them belong to the International Parapsychological Association (New York). Parapsychological research is conducted on a small scale at a number of universities in the USA, primarily private ones, as well as at other research centers financed by the government or by large companies. In 1969 the Parapsychological Association, an American organization, was granted membership in the American Association for the Advancement of Science, which unites various scientific societies. Parapsychological research is usually published in special journals, which are issued in various countries. In addition, monographs and the results of conferences and symposia are published.

In the 1920’s, L. L. Vasil’ev, a student of V. M. Bekhterev, conducted research on telepathy and clairvoyance in Leningrad. In 1965 a bioinformation section was organized at the Moscow office of the A. S. Popov Scientific and Technical Society of Radio Engineering and Electrical Communications. A section for technical parapsychology and biointroscopy was organized in 1967 at the Central Board of the Scientific and Technical Society of the Instrument-making Industry.

At first, parapsychology used rather primitive methods of research, such as guessing cards, and the suggestion of dreams or thoughts. When their assertions were criticized and denounced, parapsychologists sought new means of proof. Parapsychological methods were greatly influenced by an influx of engineers and physicists, who brought their own methods of research, presuming that the human brain acts as an electronic device and that in studying it concepts may be borrowed directly from relevant areas of physics. Thus, contemporary parapsychology uses some of the latest methods, especially computer technology.

Some parapsychologists wrongly believe that the phenomena they study are ordinary physical ones that can be explained by electromagnetic radiation. They continue to search for and measure electromagnetic fields, which are referred to by various terms (bioplasma, electrical aura, and biopotential, for example). This approach is combined with various traditional research methods, such as remote suggestion, and guessing one out of five special cards (Zener cards). Instrumental methods (including the most modern methods) of evaluating functional states of the individual have reached a high level of development in parapsychology. Although some of the research methods used specifically in parapsychology have not revealed the character of parapsychological phenomena, some of them have proved useful in psychophysiology or experimental psychology.

The insufficient validity of research methods in many parapsychological experiments has, of course, irritated many scientists and evoked their mistrust. Too-frequent instances of outright deception and fraud have reinforced these reactions. In addition, scientists mistrust the results of parapsychological research because the phenomena studied are not reproducible and therefore fail to meet the standards that inspire confidence in scientific facts. Parapsychologists explain that these phenomena cannot be reproduced because they are unique: they arise during special mental states, they are difficult to induce, and they are extremely unstable and disappear as soon as any external or internal conditions prove unfavorable. The principal difficulty in interpreting parapsychological phenomena stems from their uniqueness, from the impossibility of reproducing them. Apparently, some of them are genuine. However, lack of knowledge of the channels for transmitting information or influence hinders scientific recognition of their existence. The principal hopes and efforts of a number of parapsychologists are focused on studying the electromagnetic fields of organisms as means of biological communication and as carriers of information. Research of this kind is conducted on insects, animals, and humans. However, many contemporary researchers are unwilling, at least in public, to associate their work with parapsychology. A physical basis for parapsychological phenomena has not yet been discovered.

In dealing with parapsychological phenomena, it is necessary to distinguish between alleged “supernatural” phenomena publicized by mystics and charlatans and phenomena that exist but for which there is no satisfactory scientific psychological and physical explanation. The false phenomena should be exposed and demystified. The others are the subject of studies at psychology, physiology, biophysics, and other appropriate scientific institutions.

[¦par·ə·sī′käl·ə·jē]
(psychology)
The study of the phenomena of extrasensory perception and psychokinesis.
McGraw-Hill Dictionary of Scientific & Technical Terms, 6E, Copyright © 2003 by The McGraw-Hill Companies, Inc.

the study of mental phenomena, such as telepathy, which are beyond the scope of normal physical explanation
www.parapsychology.org/
www.psiresearch.org/para1.html
Collins Discovery Encyclopedia, 1st edition © HarperCollins Publishers 2005

Feedback
Flashcards & Bookmarks ?
Please log in or register to use Flashcards and Bookmarks. You can also log in with
Flashcards ?
My bookmarks ?
+ Add current page to bookmarks
Mentioned in ?
References in periodicals archive ?
Then, sometime in the mid-'90s, my Canadian friend and fellow psychic researcher, Dr.
Our electric body
Gemma Galgani, an Italian saint, was accompanied by her guardian angel all her life, and John Lilly, an American biologist and psychic researcher, described him as a being superior to us.
Have a talk with your guardian angel
She has worked as a healer, a psychic researcher and has accurately predicted the future for up to 25 years.
See what the future has set for you; Sandra's Psychic Solutions
The Aykroyds' father was also a psychic researcher.
'Millennium beat' spawns reality show replicants
The more I read the Christian bible as literature and history and not as a religious book, the more I am convinced that it contains most of the psychic, paranormal and supernatural phenomena studied by modern psychic researchers.
Do out-of-body experiences make one prone to 'demonic influences'?