Within the Spiritualist community, psychic surgery refers to two very different phenomena. Many Spiritualists believe that each person possesses an astral double, an invisible, subtle body that reproduces the physical body. Some medium healers can see this body, and while in a trance they believe that they are able to make surgical-like changes in that body that will then be reproduced in the physical body. When watching such a psychic surgeon, the entranced medium will assume the posture of a surgeon and make motions in space as if conducting an invisible operation.

However, the term psychic surgery is more commonly used to refer to a form of psychic healing that became popular in the Philippines in the years after World War II. In this form of healing, the medium appears to open the body (blood will often flow), remove tissue from it and close it up without leaving a scar. Such operations are usually performed without any antiseptic and no cases of later infection have been reported.

The most famous of the Philippine healers was Tony Agapoa. After accounts of his healings began to circulate in the West in the 1960s, a number of Americans traveled to the islands and made films of him and others who performed similar operations. Through the 1970s and 1980s considerable enthusiasm was generated because the films showed what appeared to be the healers making incisions, placing their bare hands inside the body (primarily the stomach region), removing tissues, and closing the body as if no incision had been there.

By the end of the 1970s, a variety of observers of the Philippine operations began to claim that psychic surgery was simply a form of slight-of-hand stage magic. Several professional paranormal debunkers with stage magic credentials were able to reproduce every effect that appeared in the movies of the Philippine healers. Once pointed out to Westerners who traveled to the Philippines, the fraud became evident to all. Hearings were held in Washington in 1974 and 1984 calling attention to the fraud, and accounts of the tricks performed by the healers circulated widely in the 1980s that virtually stopped the market of foreigners.

Philippine healers caught performing their tricks, including the use of chicken parts that were palmed and made to appear as if they had been taken from the body, defended their practice as a means of establishing belief in the more traditional psychic healing they were actually performing.That defense did little to rehabilitate their reputation, however. Several healers who came to the United States in the early 1980s were arrested and escaped prosecution only by fleeing back to their homeland. In spite of the exposure, psychic surgeons continue to operate in the Philippines, and supporters in the West continue to try to argue for the genuineness of the phenomenon. 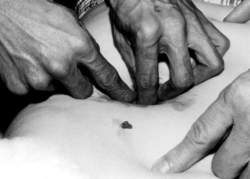 A psychic surgeon usually goes into trance and then cuts into the patient with any sharp object, such as scissors, a knife (a kitchen knife, or even one with a rusty blade), a razor blade, or a letter opener. Something is usually removed from the patient and the wound is closed up simply by pressing the two sides of the cut together, causing all signs of any incision to disappear. The removed object is frequently referred to as a tumor. A number of alleged “psychic surgeons” have been found to be fraudulent, not actually cutting into the patient’s body but “palming” such objects as chicken livers or other animal tissue to produce as the “removed” tumor. However, a number of untrained, unskilled peasants have been carefully observed by actual surgeons and found to have done what they claimed to do, with x-rays taken before and after the event to prove it.

José Pedro Arigó lived in a small town in Brazil. He was probably one of the best known of the “psychic surgeons.” Born in the town of Congonhas do Campo in 1918, he performed surgery on many patients while in trance, with a deceased German surgeon named Dr. Fritz working through him. Francis King said, “(Arigó's) psychic surgery was subjected to intense examination by physicians, surgeons, and psychic investigators. They never detected any sign of fraud or sleight-of-hand. Films were also taken of Arigó in action. They seemed to show him conducting major operations without shedding more than a few drops of blood.” David St. Clair, a former Brazilian correspondent for Time magazine and author of a number of books, claims that he witnessed Arigó remove the eye from the socket of a blind boy, scrape the back of it, and then replace it, giving the boy back his sight. King said, “The fact that some of Brazil’s psychic surgeons have been detected in fraud does not invalidate the achievements of others … A substantial number of the patients these surgeons have treated—often people whose lives were despaired of—have recovered their health.” Arigó was killed in a car crash in 1971.

Lourival de Freitas is another Brazilian healer. He has three spirit guides to help him with his surgery. They are the Roman emperor Nero, a woman of Nero’s court, and a Japanese man names Sheka. Sheka specializes in lung and bronchial problems. English journalist and psychical researcher Anne Dooley had de Freitas work on her. She had a bronchial condition which her own doctors had pronounced incurable. After a brief operation where the surgeon made a small cut in her back and from which he withdrew a large clot of blood, Dooley returned to England. She was x-rayed and found to be cured. Another Brazilian psychic surgeon of note is Edivaldo Siva, a schoolteacher whose spirit guides include doctors from various countries, including Arigo’s Dr. Fritz. Silva works in a trance.

The Philippines is also home to a number of psychic surgeons. One of the most notable is Tony Agpaoa. He makes his incisions with his bare hands, in a matter of seconds. Any malignant growth is pulled out, alcohol is poured over the wound, and the incision is pressed closed. There is invariably no sign of a scar afterward. Another well known Filipino healer is Angelo, of Manila, which has become a thriving center of psychic surgery and Spiritualist healing. Today more than four hundred healing centers allied with Spiritualists exist through the Philippine islands. Josephine Sison is another respected Filipina healer. She has been studied and filmed by British scientist Dr. Lyall Watson. Watson witnessed more than two hundred operations performed by Sison and concluded that “about 85 percent of them involved materialization phenomena.” He believes that such healers possess a form of materialization mediumship. Watson wrote of his experiences in a book, The Romeo Error (1975).

Feedback
Flashcards & Bookmarks ?
Please log in or register to use Flashcards and Bookmarks. You can also log in with
Flashcards ?
My bookmarks ?
+ Add current page to bookmarks
Mentioned in ?
References in periodicals archive ?
the Red Sea before Moses' wand - he's a psychic surgeon."
Deadly Blessings: Faith-Healing on Trial
Lyall Watson, a South African biologist who wrote such best-selling books as 'Super Nature,' 'Beyond Supernature' and 'The Romeo Error,' pointed out that when scientists tried to photograph or examine in the laboratory objects which were materialized, for example, by spiritual psychic surgeons in the Philippines, they disappeared from sealed containers.
The power of intention
For example, psychologist Lee Pulos and physician Beverly Morgan investigated and video-documented surgeries performed by the Brazilian psychic surgeon "Dona Cicera," where malignant tumors ostensibly "dematerialized" or "became attached" by some unknown means to surgical instruments or a tube that Dona Cicera merely inserted into the open wounds (e.g., Neuman, 1985; Pulos & Richman, 1990, p.
Mind-Matter Interaction: A Review of Historical Reports, Theory, and Research
Lucy Jackson's bizarre application to set up as a "psychic surgeon" was approved by Prince's Trust officials without anyone batting an eyelid.
Royal nod for healer
A British psychic surgeon named Stephen Turoff, inserted the knife inside my nose to clear it of mucus which was bothering me.
Incredible, bizarre instances I've experienced and witnessed
Playfair also mentions as somewhat premonitory the fact that Chico Xavier wrote of psychic surgery in 1954 before "anyone" had heard of the famous psychic surgeon Arigo, yet the latter started practicing somewhere around 1950.
Chico Xavier: Medium of the Century
In Urdaneta, Pangasinan, I saw a well-known female psychic surgeon, Josephine Sison, pull out various veins from the legs of a foreign patient without removing her stockings.
Paranormal evidence is hard to ignore
A friend from a newly established government agency asked my help to bring his employee to a very famous faith healer and psychic surgeon in Baguio, and decided right away to get her out of the hospital and bring her to the healer.
Getting a second opinion pays