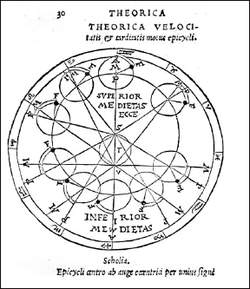 Claudius Ptolemy (100–178), sometimes called the father of Western astrology, was a Greek astronomer and astrologer who lived in Alexandria, Egypt. Ptolemy was a highly learned individual, with a broad grasp of geography, mathematics, astronomy, and music. His account of the motions of the planets, which placed Earth as the stable center around which the Sun, stars, and planets revolved, was generally accepted until the time of the Copernican revolution.

In his classic astrological work, the Tetrabiblos, Ptolemy attempted to compile the astrological knowledge of his predecessors and systematize it into a unified discipline. He also offered a theory of astrological influence in terms of the science of his day. Despite the shortcomings of his work, Ptolemy’s organization of the body of diverse information into a coherent whole made him the most influential single astrologer in Western history.

Feedback
Flashcards & Bookmarks ?
Please log in or register to use Flashcards and Bookmarks. You can also log in with
Flashcards ?
My bookmarks ?
+ Add current page to bookmarks
Mentioned in ?
References in periodicals archive ?
Pride of place should be accorded to another Ptolemy, Claudius Ptolemaeus, the astronomer and geographer (C.
Alexandria the Great: on the Mediterranean at the western edge of the Nile delta stands the most important and enduring of all the many cities founded by Alexander. Though much of its material past has been destroyed or lies underwater, Alexandria's reputation as the intellectual powerhouse of the Classical world, fusing Greek, Egyptian and Roman culture, lives on