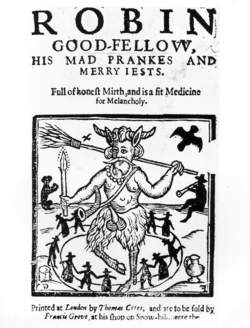 Often equated with Puck, Robin Goodfellow was originally a hobgoblin said to be the child of a mortal woman and the fairy king Oberon.

In his play A Midsummer Night's Dream, Shakespeare makes Puck's nickname Robin Goodfellow. A chapbook printed in 1628 and titled Robin Goodfellow—His Mad Pranks and Merry Jests relates a short history of the fairy. He has the power to change his shape, and his job is to reward good people and punish bad.

Robin was the name frequently given, in the Middle Ages, to the earthly representative of the god of the Witches. Sometimes this became Robin Goodfellow, sometimes Robin Artisan. There is also a possible connection with Robin Hood.