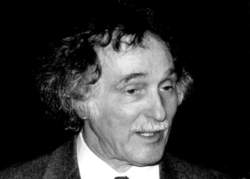 Scientist Andrija Puharich, known for his efforts to bridge parapsychology and medicine. An experimental researcher and physician, he had numerous patents granted in medicine and electronics with some being used for the treatment of hearing loss. Courtesy Fortean Picture Library.

Andrija Henry Karl Puharich was born on February 19, 1918, in Chicago, Illinois. His parents were Yugoslavian. He obtained his B.A. from Northwestern University in 1942, and his M.B. and M.D. from the Northwestern University Medical School in 1947. In 1943, he married Virginia Jackson; she died in 1959. He had his internship and residency in medical research at Permanente Foundation Hospital in Oakland, California, from 1946 to 1948.

In 1948, Puharich became fascinated with psychical research and set up the Round Table Foundation in Glen Cove, Maine, to study the physico-chemical basis for paranormal phenomena. There he designed and built a special Faraday Cage—a copper-sheathed, double box that enabled him to isolate a “sensitive” within an electrical field—demonstrating that electricity can be a significant aid to psychical research. As an inventor, Puharich held approximately fifty patents. Aldous Huxley described Puharich as “one of the most brilliant minds in parapsychology.”

Puharich served in the U.S. Army Medical Field Service School and the Army Chemical Center in Edgewood, Maryland from 1953 to 1955. In June, 1954, he began studying a young Dutch sculptor named Harry Stone, who would go into deep trance and speak what was presumed to be the ancient Egyptian language. He would also write Egyptian hieroglyphics, of which he had no previous knowledge. Puharich studied him for three years.

Another of Puharich’s subjects for psychical research was medium Eileen Garrett. He also studied Peter Hurkos. In 1960, Puharich led an expedition to Oaxaca, Mexico, to study the sacred mushroom rite of the Chatino Indians. He went on to examine psychic surgeon José Arigó, who removed a lymphoma from Puharich’s arm in less than a minute. Puharich witnessed more than 200 surgeries performed by Arigó and filmed many of them. In 1971, Puharich visited Israel to study Uri Geller.