an area of engineering dealing with the study, development, and use of methods and technical devices for the generation, conversion, and measurement of electric pulses. Processes that occur in connection with the action of electric pulses on various electric circuits, equipment, and other objects are also studied and analyzed.

Electric current and voltage pulses are widely used for various purposes in various areas of science and engineering. They are most widely used in electronics for operation of various types of electronic equipment in the pulsed mode. Both nonrecurrent pulses (radio-wave pulses and video pulses) and, more often, pulse trains, which form pulse signals that carry data or control the operation of electronic equipment, are used. In the pulsed mode, electric signals act upon an electronic device intermittently rather than continuously (over the entire time of operation). The intermittent structure of pulse signals is the primary reason for the useful properties of equipment operating in the pulsed mode.

Pulse signals may be classified according to amplitude, pulse duration, and pulse recurrence frequency, as well as by their relative arrangement in a pulse train. A pulse signal in the form of a train of three pulses, which are grouped according to some predetermined code that defines, in particular, the spacing of pulses in the train, is shown in Figure 1.

Pulse signals may have a more complex structure that depends on the type of modulation and the pulse shape. Some complex electrical oscillations (Figure 2), in contrast to sine-wave oscillations, are discontinuous. Such complex oscillations have a very wide frequency spectrum and characteristic points (more precisely, sections of a very small time span) at which the rate of change of the oscillatory process undergoes abrupt jumps (discontinuities). These properties make oscillations of complex shape similar to typical pulse processes. Pulse signals with carrier frequencies from dozens of hertz (Hz) to dozens of gigahertz are often used in pulse engineering. 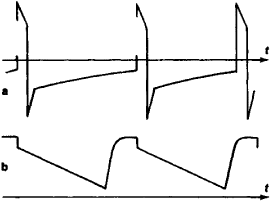 A high degree of energy concentration in time may be achieved in the pulsed mode. For example, in powerful pulse-network modulators comparatively slow energy storage takes place in the storage elements during the long time interval between pulses. Then, during a time span that is considerably shorter than the storage period, the stored energy is released in the load element. As a result, electric pulses whose power level significantly exceeds the nominal rating of the power supply may be produced. This is important in the design of radio or electronic equipment. For example, the power of a radio-wave pulse radiated by a radar station may exceed dozens of megawatts. The sharp drops in the amplitude of electric pulses make possible very accurate fixation of the time of action of such pulses, as well as clear separation of the two possible states of an electronic circuit: “current flow” versus “no current flow” (“yes” versus “no”). Electronic pulse equipment functioning as a contactless electronic switching device is capable of switching electric circuits in 10−6 or even 10−9 sec.

The concept of a pulse is usually associated with the idea of short duration. However, short pulse duration is a relative concept; pulse duration may vary within wide limits, depending on the area of application. For example, the duration of pulses in automation is of the order of 0.01–1.0 sec; in pulse radio communication, 10−6sec; and in the physics of fast particles, 10−9 sec. However, pulses of various durations and recurrence frequencies are often used in the same area of engineering. In radar work electric pulses may have a duration of 10−3 to 109− sec and a pulse repetition rate of several hertz to 104 Hz. There is a trend in pulse engineering toward shorter pulses and higher pulse repetition rates, resulting from a desire to increase the efficiency of electronic equipment, its resolving power (for example, in radar), or its speed of operation (in computers).

The ratio of the length of the interval between pulses to pulse duration (the off-on time ratio) is sometimes more important. It usually does not exceed 10 in numerical control; it is of the order of 10–100 in radio communications, and it varies from 100 to 10,000 in radar. Transient processes, which are of great importance in pulse engineering, occur upon action of electric current or voltage pulses on a circuit that is capable of storing energy. Phenomena associated with these processes are often used in the operation of pulse equipment; however, in many cases transient processes have a detrimental influence and can cause complications in the design and circuitry of pulse equipment. Therefore, a great deal of attention is paid to the analysis of transient processes in pulse engineering. The specificity of methods and devices for formations, conversion, measurement, and recording of pulse signals and of the analysis of processes occurring in pulse equipment results mainly from the nonstationary nature of both the equipment and the signals.

Pulse methods of operation are widely used in television, where both the video signal and the synchronizing signal are pulsed. Radio-wave pulses were used to solve the important problem of distance measurement, thus influencing the development of pulse-modulated radar and radio navigation (in acquisition systems, radio altimeters, and ship and aircraft navigation). Pulse coding of messages, based on various principles of pulse modulation, makes possible radio communication with a high noise immunity, as well as multichannel radio communication for telemetry (time-division multiplexing). Future developments include the use of pulsed mode for radio control over great distances (for example, the control of artificial earth satellites, spacecraft, and lunar vehicles).

Pulse methods are essential in data transmission and measurement techniques, which are used, in particular, in space electronics and in research in the physics of fast particles. The operation of modern digital computers and of various types of automatic digital equipment is based on pulse methods and techniques. Such equipment is used not only as a means for automation of computing processes but also as a tool in solving various logic problems in automated data processing. For this purpose, pulse signals that carry data (usually together with noise) undergo appropriate conversions; logic operations are carried out with the aid of logic circuits and pulse gating devices. In this manner the useful data contained in pulses being processed are separated, analyzed, identified, and stored. Methods of pulse engineering are exceptionally widely used in electronic meters (frequency meters, oscillographs, harmonic analyzers, and time-interval indicators).

The first practical application of the pulsed mode of operation of electrical equipment is associated with the invention by the Russian scientist P.L. Shilling of the electromagnetic telegraph (1832), which was improved by the Russian academician B.S. Iakobi and by the American inventor S. Morse. The inventor of radio, A.S. Popov, used an impact spark transmitter as a generator of radio waves (1895). In 1907 the Russian scientist L.I. Mandel’shtam proposed the use of electrical variables that change according to some known law to create a precise time scale. His idea was used in the time-sweep circuits of oscillographs; a method for studying pulse processes of short duration was thus discovered. Also in 1907, the Russian scientist B.L. Rozing was the first to use a cathode-ray tube for reception of video signals, thus beginning the development of television. In 1918 the Soviet scientist M.A. Bonch-Bruevich developed and studied a “cathode relay,” which made possible an abrupt change in the current flowing in an electron tube and in the voltage across its electrodes. In 1919 the American scientists H. Abraham and E. Bloch published an article in Annales de Physique describing a similar device—the multivibrator. Concurrently, the American scientists W. Eccles and F. Jordan developed the flip-flop circuit. Multivibrators and flip-flops are widely used in modern pulse engineering.

In the late 1920’s the development of shortwave radio communications necessitated measurements of the altitude of ionized atmospheric layers. The first pulse-operated distance measuring equipment in the USSR was built in 1932 under the supervision of M.A. Bonch-Bruevich. The principles of operation used in this equipment were later applied to pulse radar. The rapid development of pulse engineering was stimulated by improvements in radio communications, television, radar, radio navigation, remote control, telemetry, and computer technology, as well as by the solution of several theoretical problems, among them the theory of nonlinear and discontinuous oscillations developed by the Soviet radio physicists A.A. Andronov, A.A. Vitt, and S.E. Khaikin. Progress in semiconductor electronics and in integrated circuit technology is of utmost importance for the current state and further development of pulse engineering.