an area of electrical engineering that deals with the generation, measurement, and use of high-voltage pulses with amplitudes of 102 to 107 volts (V) and current pulses with amplitudes of 102 to 107 amperes (A). Pulse duration varies from 10−1 to 10−10 sec. Such pulses may be nonrecurrent pulses, or they may be recurring, with a high off-on time ratio.

Voltage pulses with amplitudes up to 107 V are produced by pulse voltage generators. Such generators contain a group of capacitors C (Figure 1), which are connected in parallel through resistors R during charging by the DC voltage source S. When the voltage on the capacitors reaches the required value, they are switched in series by means of spark gaps G (the Arkad’ev-Marks circuit). The pulse rise and decay times can be adjusted by the damping resistors Rd, the discharge resistor Rdis, the capacitor Cf, and the load capacitance O.

Equipment other than pulse voltage generators—for example, high-voltage test transformers, whose primary windings are fed by capacitor banks—is used to produce pulses with an amplitude of 106 V, rise time of ∼ 10−4 sec, and a decay of ∼ 10−3 sec. A special capacitor charged by a pulse voltage generator and discharged through an additional “sharpening” spark gap is used to produce pulses with a sharper front edge.

Pulses with a rise time of ∼10−9 sec, a total duration of ∼10−8’10−7 sec, and an amplitude of 104–106 V can be produced using nanosecond pulse generators. The circuit of such a generator differs from that shown in Figure 1 in that the capacitors are replaced by sections of coaxial cable, which has distributed capacitance, and resistors RdRf are omitted. Nanosecond pulses can also be produced using sections of coaxial cable connected according to the circuit shown in Figure 2, sections of a three-part strip line (Bliimlein circuit; Figure 3), or sections of a spiral strip line (spiral generators; Figure 4). In the last two generators voltage doubling (Figure 3) or multiplication (Figure 4) occurs upon breakdown of the spark gap G and reflection

of the wave from the terminal of the line. If there are no special requirements for the shape of the voltage pulse, pulses with an amplitude of the order of 104–105 V can be produced using pulse transformers (Ruhmkorff coil or Tesla transformer).

High current pulses are used (1) in the generation of pulsed magnetic fields in thermonuclear equipment and charged-particle accelerators, in acceleration of plasma and metal bodies, in magnetic-pulse metalworking, in quick-opening electromagnetic valves, and in pulsed electric drives; (2) for rapid heating of gases and conductors (the heating of gas in aerodynamic and thermonuclear research, the generation of powerful shock waves and diverging fluid streams for echo sounding and seismic prospecting, the deformation and destruction of materials, electric explosion of conductors, power supply for pulsed light sources, spark-erosion machining of metals, and pulse welding); and (3) for testing electrical devices and switching apparatus and the simulation of destructive effects of lightning current.

Devices used as sources of current pulses include shock-excited oscillators, which are capable of storing energies up to 108 joules as the kinetic energy of a massive rotor; accumulators; capacitor banks (capacitive storage devices) charged by a DC voltage supply (for example, a Gorev circuit); inductive storage devices, in which the energy is stored in induction coils; and explosion generators, in which the current-carrying circuit or coil decreases in volume as a result of an explosion or the action of a magnetic field (Figure 5). 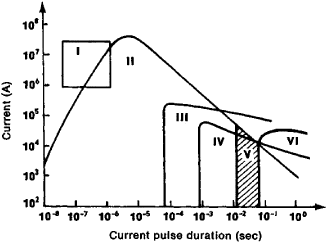