an enzyme whose prosthetic group is pyridoxal phosphate. Pyridoxal enzymes constitute a large class that includes aminotransferases, decarboxylases, racemases, diamine oxidases, and monoamine oxidases, all of which catalyze very important conversions of amino acids in living organisms. The general theory explaining the activity of pyridoxal enzymes was developed in 1952 by A. E. Braunshtein and M. M. Shemia-kin and in 1954 by the American scientists D. Metzler and E. Snell. According to this theory, the key to the catalytic activity of pyridoxal enzymes is the capacity of pyridoxal phosphate’s aldehyde group (—CHO) to form azomethines, or Schiff bases, of types I and II with amines or amino acids: 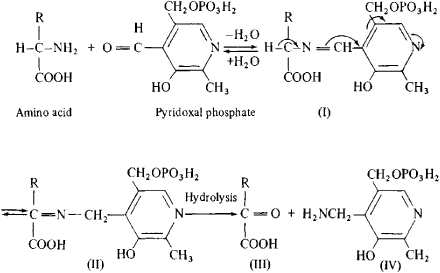 An electron shift (indicated by curved arrows in the above equation) occurs in the azomethines from the a-carbon atom of the amino acid to the nitrogen atom of the pyridine ring of pyridoxal phosphate; this shift polarizes and cleaves the bond at the a-carbon atom of the amino acid. The direction and specificity of the subsequent reactions are determined by the structure of the enzyme’s protein moiety, the apoenzyme. In all pyridoxal enzymes, the aldehyde group of pyridoxal phosphate forms a bond with the ∊-NH2 group of a lysine residue in the apoenzyme. Thus, the first step in the reaction of a pyridoxal enzyme with its amino-acid substrate is a substitution reaction in which the NH2 group of the amino acid replaces the NH2 group of the lysine residue, which is bonded to the CO group of pyridoxal phosphate; the product of this substitution reaction is azome-thine I.