A typical pyroelectric is tourmaline, in which a temperature change of 1°C induces a field E ≈ 400 volts per cm. A change in spontaneous polarization and the appearance of an electric field in a pyroelectric can occur not only upon a change in temperature but also upon deformation of the pyroelectric. Thus, all pyroelectrics are piezoelectrics, but not conversely (see Figure 1). 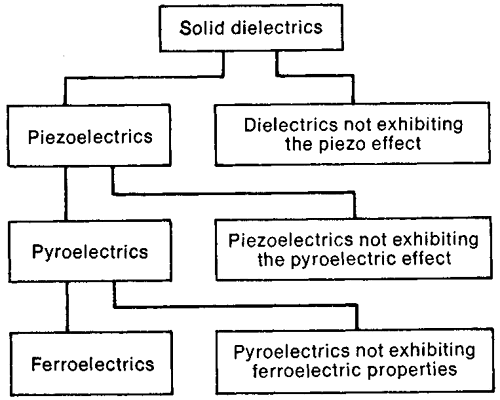 The existence of spontaneous polarization—that is, noncoinci-dence of the “centers of gravity” of the positive and negative charges—is due to the rather low crystal symmetry.

An effect inverse to the pyroelectric effect also exists: if a pyroelectric is placed in an electric field, its polarization changes, accompanied by heating or cooling of the crystal. The temperature change here is directly proportional to the electric field intensity: ΔT≈E. This phenomenon is called the linear electro-caloric effect. There is also a quadratic electrocaloric effect, when the temperature change is directly proportional to E2.

Pyroelectrics are used in engineering as radiation indicators and detectors. Their operation is based on the recording of electric signals that arise in pyroelectrics upon a change in temperature caused by radiation.