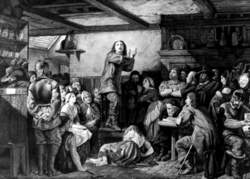 Society of Friends founder George Fox (1624–1691) preaching in a tavern, c. 1650. Followers of the movement later became known as Quakers because of their agitated movements while receiving revelations. Hulton Archive/Getty Images.

In the seventeenth century, the phrases “Children of Light” and “Friends of Truth” were applied to a group who were at the extreme left of the Puritan movement in Great Britain. The Quakers used the term “friend” when addressing anyone. “Quaker” itself was originally a cant name; a slang term applied derisively to the Society of Friends. It was used as early as 1647 and came about because of the physical manifestations of emotion, characteristic of many early Friends; the physical trembling and shaking.

The movement was founded by George Fox (1624–1691), the son of a Leicestershire, England, weaver. At age nineteen Fox had become disillusioned with the way in which professed Christians failed to live up to the standards they preached. He traveled for some years searching for spiritual help before eventually hearing clairaudiently a voice from spirit directing him. In 1649, he interrupted a preacher and was imprisoned for it. He was again imprisoned for six months in 1650, for alleged blasphemy. But by 1651, through his itinerant preaching, he started to gain a following. In June, 1652, he gathered many hundreds of people at meetings in Westmorland, and the Society of Friends was started (though the name “Society of Friends” did not appear until the late eighteenth century). In his preaching, Fox violently denounced all parish churches, calling them “steeple houses.” Quakerism had no fixed creed, no liturgy, no priesthood. In addition, it admitted women on an equal footing with men. As Boddington points out (The University of Spiritualism, 1947), “This last item was peculiarly offensive to priesthoods, who regard Paul’s statement, ‘The women shall keep silent in the church,’ as a divine command.”

This was a time of great religious unrest in Great Britain with a variety of groups being formed, such as the Fifth Monarchy Men, Muggletonians, Ranters, Familists, and Seekers. The Seekers met together at set times, not to pray but to stand about in silence, waiting for divine inspiration. They would then begin inspirational speaking. Many of these Seekers responded to Fox and joined his group. John Lewis says that Fox “tried to draw men away from the ‘dead letter’ of scripture, and opposed the prevailing doctrine of the total depravity of man by asserting that in every man there was a divine spark … it suggests that any man or woman can become a vehicle of the spirit to minister to and enlighten mankind.”

In the eighteenth century, both in Great Britain and in America, Quaker thought was dominated by Quietism, which was a doctrine of immediate inspiration of the individual conscience. It was felt that it was not easy to know the will of God and the only true way to find it was to be totally “passive.” In Quakerism, the insistence was on the inward and spiritual experience, with the operation of the spirit not limited to time, individual, or place. The early Friends claimed that “those who did not know ‘quaking’ or ‘trembling’ were strangers to the experiences of David, Moses, and the Saints.” (Encyclopedia Britannica)

Trying to escape persecution in England, Quakerism entered America in 1656, in Massachusetts, though four of them were hanged there. In 1656, 1657, and 1658 laws were passed in Massachusetts to prevent the introduction of Quakers there. William Penn (1644–1718), who was an ardent Friend, secured a grant from Charles II for a new colony. He founded Pennsylvania and also sent many hundreds of Quakers to New Jersey. From the early nineteenth century, Friends took part in the increasing westward migration, moving from North Carolina and Virginia as well as from Pennsylvania.

A number of Quakers later turned to Spiritualism. For example, Isaac and Amy Post (Amy is known as “The Mother of Modern Spiritualism") were originally Hicksite Quakers; followers of Elias Hicks. Boddington points out that spirit manifestations, and psychic experiences were fairly common in the early days of Quakerism. As he says, “Warnings, premonitions and spiritual guidance were openly avowed and reported.” George Fox, while in prison in the north of England, prophesied the Great Fire of London, which broke out two days after his release from prison. He also prophesied that “within two weeks the (Parliamentary) Speaker would be plucked from his chair;” an event that took place in that time frame when Cromwell dissolved Parliament.

An offshoot of the Quakers in their early days was known as the “Shaking Quakers.” They became notorious because of their trembling while indulging in inspirational speaking. They manifested all the trance states, with visions and prophetic utterances. Ann Lee was the founder of the Shakers; she was frequently imprisoned for breaking the Sabbath by dancing, shouting, and blasphemy. The “blasphemy” was repudiation of the orthodoxy of her time. She was often called “Mother Lee.” She was born in Manchester, England, in 1736. She died in 1784.

The Shakers’ main way of worshipping was through dance, with the men at one end of a hall and the women at the other end. They would dance or march toward each other, swinging their arms, advancing and retiring. They would then turn and face the side walls and do the same advancing and retiring. Then they would form into two concentric circles; the women in the inner one and the men in the outer one. There they would move rapidly round and round, singing and shouting. They would also dance independently, sometimes spinning round and round for up to half an hour or more. They would shake and tremble, and they would speak rapidly in unknown tongues (glossolalia). According to Nandor Fodor, “It seems clear that much of the very genuine joy and creativeness of the Shaker community arose from the intense energy of sexual sublimation.”

In 1838, Philemon Stewart, a Shaker, arrived at a meeting so agitated that he needed help just to stand up. He suddenly started speaking; delivering a direct communication from spirit, in this instance from “the Heavenly Parents” Jesus and Ann Lee. Sometimes the “medium" delivering such a message would fall to the floor and go into trance, much as a Vodoun follower being possessed, or “ridden” by the loa. Some people, after giving their message, went into convulsions and suffered complete loss of speech. Many of the messages that came through came from the spirits of deceased Shaker Elders. The main leader of the Shakers in the Manchester area of England was James Wardley, who had previously been a member of the Society of Friends. Ann Lee was a follower of Wardley. At that time the Shakers were known as the United Society of Believers in Christ’s Second Appearing.

In 1774, Mother Ann and eight other members of her group set out to establish the Shakers in America. They reached their greatest number in the decade before the Civil War (1861–1865), with 6,000 members. Fifty years later their numbers had sunk to only 1,000. With laws of strict celibacy, the Shakers were destined for extinction. But in 1847, the Shakers were warned several times through spirit communication that the manifestation would cease, but that a wider type of manifestation would soon appear. In 1848, the Fox Family experienced their phenomena, leading to Modern Spiritualism.

Feedback
Flashcards & Bookmarks ?
Please log in or register to use Flashcards and Bookmarks. You can also log in with
Flashcards ?
My bookmarks ?
+ Add current page to bookmarks
References in periodicals archive ?
Among these were spiritualists, who encourage seances; Adventists, who looked to an early end to the world as known; Pentecostals, who spun off from the "holiness" wing of Methodism when that movement turned somewhat stale; Quakers and Shakers and importers of Theosophy found their place.
Fits, Trances, & Visions: Experiencing Religion and Explaining Experience from Wesley to James
Encyclopedia browser ?
Full browser ?
CITE
Site: Follow: Share:
Open / Close