A type of flow pattern exhibited by superfluids, such as liquid 4He below 2.17 K (-455.76°F). The term vortex designates the familiar whirlpool pattern where the fluid moves circularly around a central line and the velocity diminishes inversely proportionally to the distance from the center. The strength of a vortex is determined by the circulation, which is the line integral of the velocity around any path enclosing the central line. See Vortex

Quantized vortex lines are usually produced by rotating a vessel containing superfluid helium. At very low rotation speeds, no vortices exist: the superfluid remains at rest while the vessel rotates. At a certain speed the first vortex appears and corresponds to the first excited rotational state of the system. If the container continues to accelerate, additional quantized vortices will appear. At any given speed the vortices form a regular array which rotates with the vessel.

Quantized vortex lines were first detected in the mid-1950s by their influences on superfluid thermal waves traveling across the lines. In the late 1950s it was discovered that electrons in liquid helium form tiny charged bubbles which can become trapped on the vortex core but can move quite freely along the line. These electron bubbles (often referred to as ions) have been one of the most useful probes of quantized vortices. Researchers have been able to use ions to detect single quantized vortex lines. In one experiment the trapped ions are pulled out at the top of the vortex lines, accelerated, and focused onto a phosphor screen. The pattern of light thus produced on the phosphor is a map of the position of the vortices where they contact the liquid meniscus (see illustration). See Liquid helium, Superfluidity 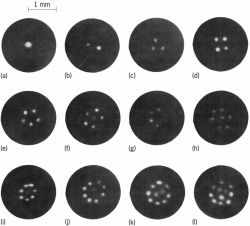 Stationary configurations of vortices which appear when a cylindrical container of superfluid 4He is rotated about its axis
McGraw-Hill Concise Encyclopedia of Physics. © 2002 by The McGraw-Hill Companies, Inc.

Feedback
Flashcards & Bookmarks ?
Please log in or register to use Flashcards and Bookmarks. You can also log in with
Flashcards ?
My bookmarks ?
+ Add current page to bookmarks
Mentioned in ?
References in periodicals archive ?
Researchers perform numerical simulations of the BEC wave function based on first principles to determine if quantized vortices exist in these systems.
In this study, the BEC images did indeed show the presence of quantized vortices. In addition, the visualization also discovered an unanticipated structure of concentric vortex rings, shown in Fig.
Accelerating Scientific Discovery Through Computation and Visualization
Because it can be shown using standard definition of Hubble law that redshift quantization implies quantized distance between galaxies in the same cluster, then one could say that this equation of quantized distance (11) is a result of topological quantized vortices (9) in astrophysical scale [5]; and it agrees with Gross-Pitaevskii (quantum phion condensate) description of CMB spectrum [1].
Now it is clear from (15) that quantized vortices could be formed by different source of flux.
And because it corresponds to graph kinematic [25], generalized Bohr-Sommerfeld quantization rule for quantized vortices (22) in astrophysical scale could be viewed as signature of "super-graph"quantization.
Plausible explanation of quantization of intrinsic redshift from hall effect and Weyl quantization
It is worth noting here, because vortices could be defined as elementary objects in the form of stable topological excitations [4], then equation (6) could be interpreted as Bohr-Sommerfeld-type quantization from topological quantized vortices. Fischer [4] also remarks that equation (6) is quite interesting for the study of superfluid rotation in the context of gravitation.
Their argument was based on propagation torsion model for quantized vortices [23].
Schrodinger equation and the quantization of celestial systems