a device for amplifying electromagnetic waves by stimulated emission of excited atoms, molecules, or ions. The amplifying effect is associated with a change in the energy of intra-atomic (bound) electrons, whose motion is described by quantum mechanics. Consequently, unlike thermionic amplifiers, for example, which use streams of free electrons whose motion is described by classical mechanics, these amplifiers have come to be called quantum mechanical amplifiers.

Since, in addition to the stimulated quantum transitions of excited atoms into a lower energy state, spontaneous transitions that cause the emission of waves with random amplitude, phase, and polarization are also possible, such transitions are added to the amplified wave in the form of noise. Spontaneous emission is the only source of noise in a quantum amplifer, and it is fundamentally nonremovable. Its power is very small in the radio frequency range but increases sharply in the optical range. Therefore, radio-frequency quantum mechanical amplifiers (masers) are characterized by an exceptionally low noise level (they have no noise caused by the irregularity of the electron stream that is unavoidable in electron tubes; in addition, masers operate at temperatures close to absolute zero, and the noise associated with the the thermal motion of electrons in the amplifier circuits is very small). The sensitivity of a maser—that is, its ability to amplify very weak signals—is excellent because of the extremely low noise level. Masers are used as the input stages in high-sensitivity radio receiving equipment for the wavelength range from 4 mm to 50 cm. They substantially increase the range of operation of communications links with space stations and on-planet radar and radio telescopes.

Quantum mechanical amplifiers in the optical range are used extensively as power amplifiers for laser emission. In their principle of operation and design they are highly similar to lasers.

The induced transition of an atom from a state with energy ε2 to a state with lower energy ε1, which is accompanied by the emission of a quantum of electromagnetic energy ε2 − ε1 = ℏ (v is the frequency of the incident and emitted waves, and ℏ is Planck’s constant), leads to amplification of the oscillations. The amplification produced by one atom is very small, but if an oscillation of frequency v propagates in a substance containing a large number of identical excited atoms at level ε2, the amplification can become fairly high. On the other hand, the atoms at the lower level ε as a result of stimulated absorption attenuate the wave. In consequence the substance will attenuate or amplify the wave depending on whether more of its atoms are unexcited or excited or, as is said, which of the energy levels has the greater atom population.

If a substance is in a state of thermodynamic equilibrium, the distribution of particles with respect to energy levels is controlled by its temperature, and the lower energy level is more populated than the higher energy level (Figure 1). Such a substance always absorbs electromagnetic waves. The substance begins to amplify —it becomes active—only when the equilibrium is disturbed and there are more excited than unexcited atoms (that is, when a population inversion exists). The greater the excess of atoms at the higher level over those at the lower level (that is, the larger the inverse population difference ΔNi = N2 − N1), the greater the amplifying effect. 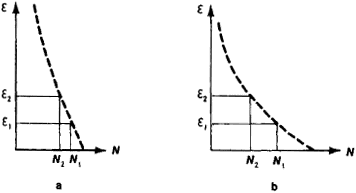 However, the inverted state of a substance cannot exist without limit. After an external influence ceases, an equilibrium distribution of the population levels (Figure 1) is again established after a certain period of time because of thermal motion of the particles and the interaction among them. This process (relaxation), which is also present while the external disturbance is acting, tends to reestablish thermal equilibrium in the substance. Therefore, an external action should be strong enough to bring the substance into a state of population inversion and should be repeated.

Various methods exist for creating an active medium. The most satisfactory method for a quantum mechanical amplifier is the method based on the use of three energy levels as proposed by N. G. Basov and A. M. Prokhorov. The particles (atoms, molecules, or ions), which have an energy spectrum containing three levels ε1, ε2, and ε3 (Figure 2), are subjected to the action of strong electromagnetic radiation (pumping). The frequency v of this radiation corresponds to the frequency of transition between the bottom level ε1 and the top level ε3 (hv = ε3 − ε1). The pumping intensity should be great enough so that the ε1 → ε3 transition occurs much more frequently than the reverse relaxation transitions. In this case the populations in levels ε1 and ε3 are equalized. Moreover, for one pair of levels ε1 and ε2 or ε2 andε3, a population inversion will take place; it occurs for the pair of levels having the slowest relaxation time and the smallest energy difference.

As the temperature T decreases, both the equilibrium population difference ΔN = N1 − N2 (Figure 1) and the inverse population difference ΔNr (Figure 2) increase. In addition, a reduction in temperature greatly retards relaxation and thereby reduces the pumping power required. Consequently, a population inversion sufficient to create efficient masers may be produced by cooling a substance down to the boiling point of helium (4.2°K). Amplifiers exist that operate at temperatures of 77°K (the boiling point of nitrogen) and even 190°K, but they are less efficient.

A fundamental characteristic of every amplifier of electrical oscillations is its amplification factor, or gain, K, which indicates by what factor the oscillation amplitude at the output is greater than the amplitude at the input. The longer the path that a wave travels in an active substance, the higher the gain of the amplifier. In a ruby crystal a wave that is propagating over a distance equal to its wavelength λ has a negligible increase in its amplitude. Thus, single crystals of large size, which are grown only with great difficulty, are required to produce sufficient gain. To achieve a gain of 10, crystals—and therefore magnets—several meters long would be required. Such an amplifier would be very cumbersome and costly.

Gain may be increased by passing the wave repeatedly through the active substance. For this purpose the active substance is placed in a cavity resonator (a cavity bounded by metal walls). A wave from an antenna, entering the resonator through a hole in its wall (the coupling iris), is reflected repeatedly and interacts with the active substance (Figure 4) for a long period. The amplification will be efficient if the phase of the wave reflected from the wall coincides each time with the phase of the incident wave. This condition is met for certain resonator dimensions—that is, the resonator, like the substance itself, must be tuned to the frequency of the wave being amplified. Upon each reflection from the wall with the iris, a portion of the electromagnetic energy is radiated outward as an amplified signal. The input and output of the resonator are isolated by means of a circulator (Figure 5). This is known as the reflector type of quantum mechanical amplifier.

To produce optimum characteristics, the proper size of the coupling iris of a quantum mechanical amplifier must be se lected, 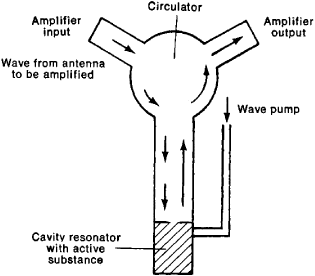 Figure 5. Schematic diagram of a reflector quantum mechanical amplifier with a single resonator

Thus, the introduction of a resonator into the design of an amplifier increases its gain but reduces its passband by the same factor; this substantially diminishes the amplifier’s useful range. Single-resonator quantum mechanical amplifiers have not gained wide acceptance because high gain and a broad passband cannot be provided simultaneously. However, a broad passband may be preserved with high gain by using several resonators. There are two types of such multiresonator masers, the reflector amplifier with a circulator (Figure 6) and the transmission amplifier (Figure 7). In transmission quantum mechanical amplifiers the wave propagates along a series of resonators filled with an active substance. Where the passband is considerable, the gain in each resonator is small, but the overall gain of the whole series can be rather large. The resonators of such an amplifier are connected to one another by ferrite isolators. When subjected to a constant magnetic field the ferrites acquire the property of passing a wave that is propagating in one direction but of absorbing a wave coming from the opposite direction. The principal disadvantage of multiresonator amplifiers is the complexity of tuning the amplifier’s frequency, because when the magnetic field H changes, the natural frequency of a large number of resonators must be changed simultaneously, which is difficult technically. 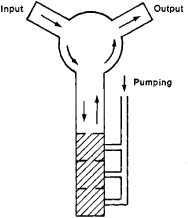 The time of interaction between a wave and a substance can be increased by using delay systems in place of a system of resonators. The propagation velocity along such a structure is much lower than in a wave guide or in free space. The gain is correspondingly increased when the wave passes through a unit length of the crystal. It is important to note that the delay structures have broad bands, which makes possible retuning of the frequency of a maser by altering only the magnetic field. The passband of such amplifiers, as well as multiresonator masers, depends on the width of the spectral line. Quantum mechanical amplifiers with a delay structure are called traveling-wave amplifiers. Ferrites, which pass a wave propagating along the delay structure in the desired direction and absorb the reflected waves coming from the opposite direction, are also used in them.

The noise of an amplifier may be measured conveniently by comparing it with the power of the thermal radiation from a blackbody. The spectrum of thermal radiation includes the optical and the radio-frequency ranges. Thus, the noise can be expressed through the absolute temperature. The minimum noise temperature of an amplifier, which is due to spontaneous emission at λ = 3 cm, is 0.5°K. For most active substances used in quantum mechanical amplifiers the noise lies between 1° and 5°K. In real amplifiers, the much higher power of thermal radiations from the feeder radio-frequency wave guides and other structural parts is added to these insignificant noises. The noise radiated by a wave guide can be described by the quantity βT, where β is the absorption coefficient of the wave and T is the wave guide’s absolute temperature. To reduce noise, as many of the input parts as possible must be cooled; however, it is impossible to cool the entire input channel down to the temperature of liquid helium. Consequently, it has not been possible to reduce the noise of a quantum mechanical amplifier from an antenna below 15°-30°K, which is approximately 100 times less than the noise level of the best amplifiers available before the advent of the quantum mechanical amplifier.

Quantum mechanical amplifiers are cooled by liquid helium in cryostats. The difficulties associated with the liquefaction, transportation, and decanting of liquid helium from transport containers into cryostats restrict the field of application of masers and complicate and raise the cost of using them. Small refrigeration machines with a closed coolant cycle have been developed. The weight of such a machine designed to cool a maser down to 40°K is 10–20 kg. A machine designed to reach 4°K weighs more than 200 kg and uses several kilowatts of power.