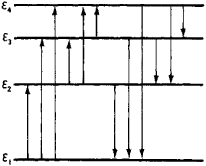 Figure 1. Part of the levels of a quantum system: ε1 is the principal level (level with the lowest possible energy) and ε2, ε3, and ε4 are the excited levels. The arrows indicate transitions involving the absorption (directed up) and release (directed down) of energy.

(which is the law of conservation of energy for such a transition). Depending on the energy difference between the states of the system in which the quantum transitions take place, photons of radio-frequency, infrared, visible, ultraviolet, and gamma radiation and X-radiation are emitted or absorbed. The aggregate of radiative quantum transitions from lower energy levels to higher ones forms the absorption spectrum of a given quantum system, while the aggregate of the reverse transitions forms its emission spectrum.

In nonradiative quantum transitions, the system acquires or releases energy on interaction with other systems. For example, on colliding with each other and with electrons, the atoms or molecules of a gas may gain energy (be excited) or lose it.

Quantum transitions in atoms and molecules will be examined below.

Radiative transitions. Radiative quantum transitions may be spontaneous, independent of external influences on the quantum system (the spontaneous emission of a photon), or stimulated, induced by the action of external electromagnetic radiation of a resonance [satisfying relation (1)] frequency v (absorption and stimulated emission of photons). Insofar as spontaneous emission is possible, a quantum system remains at an excited energy level εk for some finite time, and then jumps to some lower level. The mean time period τk that the system remains at the excited level εk is called the lifetime of the energy level. The smaller the τk, the greater the probability of the system’s transition to a state of lower energy. The quantity Ak = 1/τ2, which defines the average number of photons emitted by a single particle (an atom or molecule) per second (τk is expressed in seconds) is called the probability of spontaneous emission from the level εk. For the simplest case of spontaneous transition from the first excited level ε2 to the ground level ε1 the quantity A2 = 1/τ2 defines the probability of this transition; it may be designated A21. Quantum transitions to various lower levels are possible from excited higher levels (see Figure 1). The total number Ak of photons emitted on the average by one particle with an energy εk per second is equal to the total number Aki of photons emitted upon the individual transitions:

For induced quantum transitions the number of transitions is proportional to the radiation density pv of the frequency v = (εk — εi)/h that is, to the energy of photons of frequency v per 1 cm3. The probabilities of absorption and stimulated emission are characterized by Einstein’s coefficients Bik and Bki, respectively, which are equal to the number of photons absorbed and stimulated to emission on the average by one particle per second at a radiation density equal to 1. The products Bikpv and Bkipv define the probabilities of stimulated absorption and emission on exposure to external electromagnetic radiation of density pv, and, like Aki are expressed in sec-1.

The coefficients Aki, Bik, and Bki are interconnected by the following relations, which were first derived by Einstein and have been rigorously substantiated in quantum electrodynamics:

where gi(gk) is the degeneration multiplicity of the level εi, (εk), that is, the number of different states of the system that have the same energy εi, (or εk) and c is the velocity of light. For transitions between nondegenerate levels (gi, = gk = 1), Bki = B ik, that is, the probabilities of induced quantum transitions—direct and reverse—are identical. If one of the Einstein coefficients is known, then the others can be determined from relations (3) and (4).

The probabilities of radiative transitions are different for different transitions and depend on the properties of the energy levels εi, and εk between which the transition takes place. The more strongly the electric and magnetic properties of the quantum system that are characterized by its electric and magnetic moments change upon transition, the greater the probabilities of quantum transitions. The possibility of radiative quantum transitions between the energy levels εi, and εk with assigned characteristics is defined by the selection rules. (For greater detail, seeRADIATION, ELECTROMAGNETIC.)