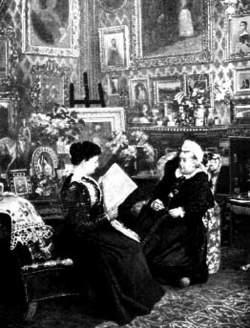 Queen Victoria and Princess Beatrice at the Osborne House on the Isle of Wight. Courtesy Fortean Picture Library.

Alexandrina Victoria, queen of the United Kingdom of Great Britain and Ireland and (from 1876) empress of India, was born on May 24, 1819, the only child of Edward, duke of Kent. Edward was the fourth son of King George III. On February 10, 1840, she married her cousin, Prince Albert of Saxe-Coburg-Gotha (1819–1861).

It is not known how much of an interest in Spiritualism Queen Victoria had before her beloved husband Prince Albert died of typhoid fever, but with his death there was a very real connection made with the world of spirit. It was reported that the queen began indulging in table tipping at the royal residence at Osborne, on the Isle of Wight.

The same year that Albert died, and within days of his passing, a thirteen-year-old boy living in Leicester, named Robert James Lees, was taking part in a family séance when a spirit claiming to be the recently deceased Prince Albert came through. At a very early age Lees had exhibited mediumistic abilities. Before he was twelve years of age he was a deep trance medium. The spirit of Albert gave a message that he said was for the Queen. A local newspaper editor, who happened to be at the séance, published the message.

Seeing the report, Queen Victoria sent two representatives to visit the boy medium. The two used false names. Lees again channeled information from the Prince, who recognized the two visitors from the Royal Court and called them by their true names. The Prince went on to write a letter, through the entranced Lees, to the Queen. In the letter, he called her majesty by a pet name known only by the two of them. When the Queen received the letter, she immediately summoned Lees to the palace.

Lees was invited to give a séance at Windsor Castle and there he gave evidence that the deceased Prince Albert was still in attendance upon Victoria. A number of séances followed and the Queen offered Lees a permanent position at court. On the advice of his spirit guide, Lees declined, though he did visit the Queen on a few rare occasions.

John Brown, the Queen’s personal servant at Balmoral (the Queen’s estate in Scotland), was named as a substitute. Brown had been a medium for many years and, as a close servant, it is possible that he had conducted séances for her in the past. But now with Albert gone, those séances became very important to Victoria. Brown was described as being a “rough character” who had a strong influence with Victoria, somewhat reminiscent of the relationship between Rasputin and the Russian Czarina Alexandra, wife of Nicholas II. Brown was two years younger than the Queen. It is said that Victoria only tolerated Brown’s rude and outspoken nature because he could make it possible for her to speak to her beloved husband.

Interestingly, although Brown is generally conceded to have been a medium and to have conducted séances for Queen Victoria, there seem to be no records of anything he produced and no details of his sittings.

When Brown died in 1883, Victoria wrote, “The shock—the blow, the blank, the constant missing at every turn of the one strong, powerful, reliable arm and head almost stunned me and I am truly overwhelmed.” She erected a statue to Brown at Balmoral.

In 1997, a movie was issued starring Judy Dench as Queen Victoria and Billy Connolly as John Brown. The movie was directed by John Madden and focused on the relationship between the queen and the commoner. It did not touch on Brown’s mediumship. The year after the movie’s release, the film’s producer claimed that he had seen a cache of “love letters” purportedly exchanged between the two. It seems extremely doubtful that they did become lovers but there was certainly an intimacy that developed between them to the point where Victoria’s children would jokingly refer to their mother as “Mrs. Brown;” the name given to the movie.

After her death, Queen Victoria herself sent messages to her last surviving daughter, Princess Louise, through direct voice medium Lesley Flint. Supposedly her majesty also spoke with Canadian Prime Minister W. L. Mackenzie King, through the “medium” William Roy, though Roy was later exposed as one of the biggest frauds in the history of Spiritualism.

Feedback
Flashcards & Bookmarks ?
Please log in or register to use Flashcards and Bookmarks. You can also log in with
Flashcards ?
My bookmarks ?
+ Add current page to bookmarks
Mentioned in ?
References in periodicals archive ?
Well-wishers balance on the roof of the palace during celebrations for Queen Victoria's Diamond Jubilee in 1897
A majestic makeover; Buckingham Palace was the ultimate fixerupper when Queen Victoria moved in. MARION MCMULLEN looks at how she and Prince Albert helped transform the unfinished building into a des-res palace
Queen Victoria cruise liner is back on the River Mersey today
Cunard Queen Victoria cruise liner is back on the River Mersey today; The liner is the first Cunard Queen to visit Liverpool this year
John's design showcases his interpretation of a "young head" portrait of Queen Victoria, surrounded by inventions and innovations from her era on the throne - including the telephone.
New coin collection to celebrate bicentennial of Queen Victoria's birth; The commemorative coins won't be entering general circulation
May 24 will mark the 200th anniversary of Queen Victoria's birth
Stunning new [pounds sterling]5 coin launches to mark 200 years since Queen Victoria's birth; The coin features a young portrait of Victoria embellished with symbols showcasing the progress, change and advancements of the Victorian age
The gold kilo coin features a double portrait of Queen Victoria and Prince Albert.
Coin commemorates 'iconic' queen
While publishing the photograph of Queen Victoria with Abdul Karim on the title of the magazine, the editor Sehba Lukhnavi had informed the readers that it was being published for the first time in Pakistan.
LITERARY NOTES: When Queen Victoria learnt Urdu from her munshi
Enhanced with the inclusion of an eight page Glossary, a sixteen page Bibliography, and a two page Index, "The Story Of Queen Victoria 200 Years After Her Birth" is an especially and unreservedly recommended addition to highschool, community, college, and university library biography collections in general, and Queen Victoria supplemental studies lists in particular.
The Story Of Queen Victoria 200 Years After Her Birth
Later on, the Society was instrumental in preserving a number of familiar Birmingham statues, most notably those of Queen Victoria, King Edward VII, Joseph Sturge and Joseph Priestley.
A RIGHT ROYAL restor ation! CITY'S ICONIC QUEEN VICTORIA STATUE SET FOR MAKEOVER
"Osborne was Queen Victoria's private family home which means visitors can step straight into Queen Victoria's world when they get here," said Michael Hunter, English Heritage curator at Osborne House.
'Victoria and Abdul' costumes go on display
COSTUMES worn by Dame Judi Dench in her role as Queen Victoria are going on display at the monarch's holiday home.
Judi in a real-life costume drama
Ms Boyle said: "The thought that my costumes for Victoria and Abdul will inhabit the same rooms and gardens where Queen Victoria walked and lingered makes it a particular honour and joy for me."
JUDI MAKES EXHIBITION OF HERSELF
This British-American biographical drama movie revolves around the real-life relationship between Queen Victoria and an Indian servant of hers; Abdul Karim.
A movie about Queen Victoria and her Indian servant