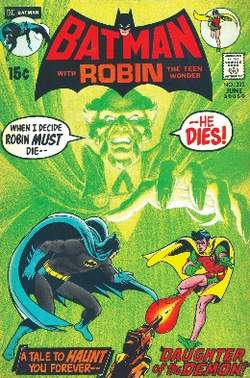 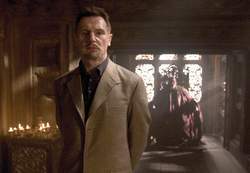 Feedback
Flashcards & Bookmarks ?
Please log in or register to use Flashcards and Bookmarks. You can also log in with
Flashcards ?
My bookmarks ?
+ Add current page to bookmarks
Mentioned in ?
References in periodicals archive ?
Summary: Washington DC [USA], May 16 (ANI): American comic book artist Neal Adams, the artist behind the now-classic Batman villain Ra's al Ghul, is all set to return with his most famous creation.
'Batman vs Ra's al Ghul': Ra's al Ghul returns in six-issue DC miniseries
American actor Liam Neeson plays the villainous Ra's al Ghul in Christopher Nolan's "Batman Begins," but the character is of Arab descent in the DC Comic books.
The Six: Casting Controversies
Includes Batman and Ra's al Ghul figures, ooze canister, reusable ooze, and two weapon accessories.
Tesco launch mince pie cookies and Christmas pudding shortbread; The 180g tubs of the buttery treats are available online and in Tesco stores
His works include the reinvention of Batman's look to the blue-and-gray color scheme, aside from creating Batman villains Ra's al Ghul and Man-Bat.
Pop culture heroes expected at Toycon 2018
The leader is a man named Ra's al Ghul, an Arabic title meaning, "Head of the Demon." The League portrays itself as superior to all political organizations in promoting what it sees as justice, a harmony derived from a very Nietzschean desire for the "will to act." The League of Shadows, Ra's al Ghul explains, has been a check against human corruption for thousands of years.
Nolan's Batman Saga: Realism and Heroism
Christian Bale stars as Bruce Wayne as he first takes on the Batman persona, and he must defend Gotham from the Scarecrow and Ra's al Ghul in the 2005 drama.
Best New Movies, TV Shows On Netflix In January 2018
And in any case, no one baulked when Irishman Liam Neeson played the Arabian-born Ra's al Ghul in (Warner/DC's) Batman Begins , though there was that time when the far-right Council of Conservative Citizens got their knickers in a twist at the thought of Idris Elba playing Heimdall the all-seeing Norse deity in Thor.
Benedict Cumberbatch as Doctor Strange: What we think so far
56) Ra's al Ghul makes Oliver an offer he can't refuse.
TV Top 5
The 62-year-old played the leader of the League of Shadows, Ra's al Ghul, in director Christopher Nolan's 2005 movie.
Liam wants to Begin Batman film role again
If we've learned anything from fantasy villains ranging from Darth Vader to the Dark Knight trilogy's Ra's al Ghul, first appearances can be deceiving.
Iron Man's suit showing signs of wear and tear