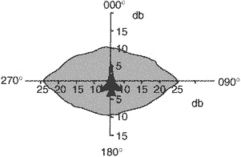 Radar cross section of a combat aircraft from various angles. It looks bigger from directly below or directly from the top than in a turn. It is the least when viewed directly from the front or the rear and is maximum when viewed from either side.
The measure of reflectivity of the received radar signals by an aircraft, it is expressed as square meters (m2). It is dependent on the true size, range, aspect, geometric shape, materials, surface texture, and other properties of the target aircraft. The most important element is the target aspect [i.e., the area normal (perpendicular) to the radar axis]. The higher the area, the greater the RCS.
An Illustrated Dictionary of Aviation Copyright © 2005 by The McGraw-Hill Companies, Inc. All rights reserved

Feedback
Flashcards & Bookmarks ?
Please log in or register to use Flashcards and Bookmarks. You can also log in with
Flashcards ?
My bookmarks ?
+ Add current page to bookmarks
Mentioned in ?
References in periodicals archive ?
The Iranian minister said that the achievements include production of military prepreg and an outdoor site measuring radar cross-sections.
Iran UnveilsTwo New Defense Achievements
According to Dawn Bartlett of the Sikorsky Advanced Design Infrastructure group, "SGI products and services provide a solid and supportive foundation for Sikorsky to engage in advanced concept development projects that require engineering design and analysis of radar cross-sections, computational fluid dynamics and operations analysis concept validations.
Sikorsky Aircraft selects SGI Technology for advanced concept projects
For example, under a programme called Outlaw Bandit, during the 1990s radar-absorbing material (Ram) was reportedly applied to vertical surfaces onboard some Spruance class destroyers and Perry class frigates, drastically reducing their radar cross-sections over particular radar bands.
For example, an airplane may have a low radar cross-section from the side, but seen from above or below it may offer a massive radar target.
At one end of the spectrum, there are relatively simple measures which can drastically reduce a ship's radar cross-section, particularly against microwave radars such as those used by aircraft and, at present, by missiles.
Stealthy warships--theory & practice. (Technology)
Testing of a RAM-coated MiG-21 showed that the new material reduces radar cross-sections by a factor of ten to fifteen.
India modernizing fighterfleet. (EC Monitor: DD(x) on the Spot)