[′rād·ē·ō ‚mēd·ē·ə′räl·ə·jē]
(meteorology)
That branch of the science of meteorology which embraces the propagation of radio energy through the atmosphere, and the use of radio and radar equipment in meteorology; this is the most general term and includes radar meteorology. Also known as radioelectric meteorology.
McGraw-Hill Dictionary of Scientific & Technical Terms, 6E, Copyright © 2003 by The McGraw-Hill Companies, Inc.
The following article is from The Great Soviet Encyclopedia (1979). It might be outdated or ideologically biased.

the science that on the basis of radio signals received studies (1) the effect of meteorological conditions in the troposphere and stratosphere on the propagation of radio waves (chiefly ultrashort waves) and (2) meteorological phenomena in the troposphere and stratosphere; the radio signals include the atmospheric emission, both thermal and that caused by electrical discharges.

The first radio-meteorological observations were made by A. S. Popov, who used a storm indicator he himself invented. Atmospheric emissions caused by storm and silent electrical discharges occupy a broad band of radio frequencies from the superlong to the ultrashort waves. These emissions, called atmospherics, are created not only by discharges during a storm but also in convective clouds, dust storms, snowstorms, and extremely dusty regions. Observations of atmospherics make it possible to determine the global distribution of storm activity and the location of intensive atmospheric fronts. 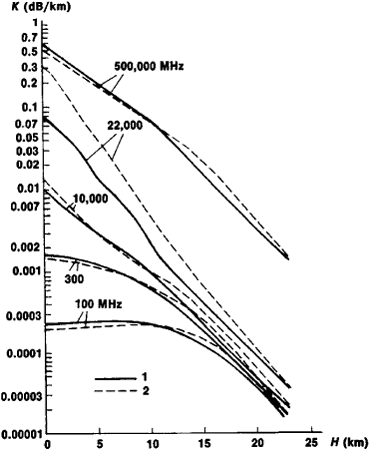 Figure 1. Dependence of the total absorption factor K for atmospheric gases on the altitude H above Washington, D.C.: (1) February, (2) August

The predominance of the influence of meteorological processes on the propagation of ultrashort waves was established in the 1920’s and early 1930’s. When radio waves propagate in the atmosphere, they are also refracted, absorbed, reflected, and scattered. The intensity of these phenomena is determined in part by the properties of the spatial distribution of the refractive index n of air, which is a function of pressure, temperature, and humidity. It is also conditioned by the presence and properties of various impurities and hydrometeors, that is, products of the condensation of moisture in the atmosphere, such as raindrops, fog, and clouds. Accordingly, radio signals may contain information on the distribution of air density, temperature, humidity, wind field and turbulence, water content of clouds, and intensity of precipitation.

When propagated, radio waves are attenuated because of the loss of electromagnetic energy that is absorbed and scattered by oxygen molecules (O2) and water vapor, hydrometeors, aerosol particles, and other inhomogeneities. In atmospheric gases the attenuation is most significant at wavelengths of 0.25 and 0.5 cm for O2 and 0.18 and 1.35 cm for water vapor, where resonance absorption occurs. The total absorption by atmospheric gases and its seasonal variability are determined by the climatic peculiarities of each geographical region (Figure 1). In fine clouds the attenuation factor is proportional to the clouds’ water content. In precipitation, both absorption and the scattering of radio waves are significant, and the dependence of attenuation on the water content or intensity of precipitation is therefore made more complex (Figure 2). In ice-crystal clouds and precipitation, the attenuation is much less than in water-drop clouds.

Because n and other factors affecting the transport of radio-frequency radiation depend on the main meteorological parameters, it is possible to use methods of analyzing and forecasting hydrometeorological phenomena to study and predict the conditions of radio-wave propagation. The branch of radio meteorology that studies seasonal variations of n and its vertical profile, absorption by atmospheric gases, and attenuation by clouds and precipitation in different climatic regions is called radio climatology. Synoptic analysis can predict the meteorological conditions that determine anomalies in the propagation of radio waves, in particular the formation of atmospheric wave guides and prolonged fading due to the presence of upstreamed reflecting layers of attenuation in precipitation. 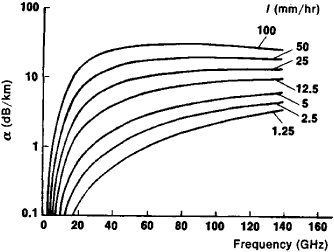 Figure 2. Attenuation factor a in rains of varying intensity l as a function of the radio frequency

Among the methods of atmospheric investigation that employ radio wave propagation, radar techniques have assumed the greatest practical significance. Scientists measure the thermal radiation of the atmosphere, underlying surface, and extraterrestrial sources with centimeter and shorter waves in the region of intense bands of absorption by atmospheric gases in order to determine density, humidity, and temperature profiles and to estimate the total moisture content of the atmosphere. Meteorological satellites use scanning radiometers operating at centimeter and millimeter wavelengths to obtain pictures of clouds and precipitation.