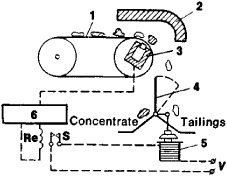 Radiometric concentration is done by means of radiometric separators (Figure 1). First, a detector registers the radiation and converts it into electric pulses. The pulses then proceed from the detector to a radiometer, in which the pulse frequency is compared with a previously given threshold value. If the frequency exceeds threshold levels, a command is given to the unit to separate the useful mineral into dressed product and wastes (tailings, or tails). 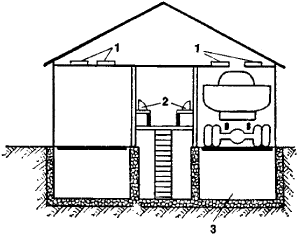 A variant of radiometric concentration is radiometric sorting, in which railroad cars, motor vehicles, skips, or other ore-laden vehicles are sorted by a radiometric control station (Figure 2). Although the station operates at a high efficiency, the coefficient of ore concentration is low. This method is therefore used mainly for separating and removing the poorest part of an ore sample from a rock mass.