Also found in: Dictionary, Thesaurus, Medical, Wikipedia.
Related to Radiosensitivity: law of Bergonie and Tribondeau
The following article is from The Great Soviet Encyclopedia (1979). It might be outdated or ideologically biased.

the sensitivity of biological objects to ionizing radiation. Irradiation gives rise to a variety of changes in cells and organisms. The manifestations of the changes are not always correlated. Therefore, in evaluating radiosensitivity it is important to take into account the criterion used to characterize it. The lethal action of radiation—cell inactivation or death and the death of multicellular organisms—usually serves as such a criterion. The lethal action of radiation can also be manifested in different forms: cells die in interkinesis after one or more divisions, and multicellular organisms die at various times after irradiation. 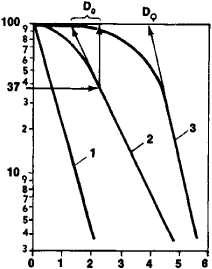 Figure 1. Characteristic survival curves: (1) bacteria and haploid yeasts, (2) diploid yeasts and mammalian cells, (3) infusorians and amebas. The arrows indicate the method used to determine D0 and DQ. The axis of the abscissas is the dose of radiation in arbitrary units; the axis of the ordi-nates is the survival rate in percent. The scale is semi-logarithmic.

To evaluate radiosensitivity, biological objects are irradiated with different doses, the number of survivors is determined, and survival curves are plotted. Survival curves are usually represented on a semilogarithmic scale for cells (Figure 1) and on a linear scale for multicellular organisms (Figure 2). The survival curves are used to find LD50—that is, the lethal dose that 50 percent of the individuals survive—and DQ and D0, which reflect the “shoulder” and slope of the straight-line component of the curves (D0 is equal to the dose that reduces the survival rate by e ≃ 2.7 times on the straight-line component of the survival curve). In experiments with mammals, LD50 is usually determined for different lengths of time after irradiation—three, five, 15,30 or more days. The resulting values of LD50/5, LD50/30, and so on reflect the radiosensitivity of those systems of the organism whose primary involvement is responsible for its death during a given interval of time. Thus, the death of mice and rats three to five days after irradiation results from injury to the intestinal tract; death occurring between five and 30 days after irradiation is due to injury to the hematopoietic system. LD50 or D0 usually serves as the measure of radiosensitivity.

The radiosensitivity of cells may differ by a factor of 100, 1,000, or greater: LD50 is 200–350 rads for mammalian cells, 10,000–45,000 rads for bacteria and yeasts, and 300,000–500,000 rads for infusorians and amebas. Cell radiosensitivity is determined by the primary vulnerability of the cell structures and by their capacity for reparation and the conditions under which they develop. In general, cell radiosensitivity is heightened by an increase in the DNA content and in the number and size of the chromosomes; it decreases with an increase in the number of chromosome sets (ploidy). 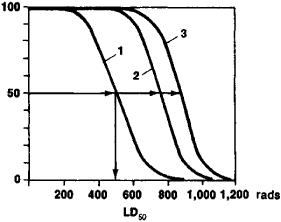 Figure 2. Typical survival curves: (1) dogs, (2) mice, (3) rats. The arrows indicate the method used to determine LDa,. The axis of the abscissas is the dose of radiation in rads; the axis of the ordinates is the survival rate in percent. The scale is linear.

Feedback
Flashcards & Bookmarks ?
Please log in or register to use Flashcards and Bookmarks. You can also log in with
Flashcards ?
My bookmarks ?
+ Add current page to bookmarks
Mentioned in ?
References in periodicals archive ?
This means as reported by Bilquez [10] that the genetic constitution affects radiosensitivity. At the genotype level, specific mechanisms are involved in the damaging and the repair of the gamma radiation effects on the body.
In vitro radiosensitivity study of Datura Sp seeds for increased alkaloid-producing mutant lines
The study authors found that the cell growth and radiosensitivity of the malignant tumor cells were not affected by any of the supplements, but two of the supplements inhibited the growth rate of the normal prostate cell lines while a third supplement also increased the cellular radiosensitivity of some normal cell lines by inhibiting DNA repair.
Prostate cancer patients should not take dietary supplements
Enhanced radiosensitivity and radiation induced apoptosis in glioma CD133-positive cells by knockdown of SirTI expression.
Radiation resistance in breast cancer
Table 1 lists the degree of radiosensitivity of various cell types found throughout the human body.
Radiation protection
Surgery has a limited role in the treatment of nasopharyngeal carcinoma because of the tumor's high degree of radiosensitivity and the anatomic barriers to surgical access.
Review of nasopharyngeal carcinoma
Because of the high degree of radiosensitivity of germinomas, chemotherapy has traditionally been reserved for patients with recurrent or metastatic disease.
Breaking down barriers to treat a patient with a germinoma: a case study
Radiosensitivity in Alzheimer disease and Parkinson disease.
Studies on DNA repair defects in degenerative brain disease
This may suggest gender-related difference in tumor cell radiosensitivity and significant role of Ku70 expression and RAD51 SNP as prognosticators.
Positive effect of single nucleotide RAD51 135G>C polymorphism and low Ku70 protein expression on female rectal cancer patients survival after preoperative radiotherapy
Icariin enhances radiosensitivity of colorectal cancer cells by suppressing NF-kB activity.
Icariin reduces human colon carcinoma cell growth and metastasis by enhancing p53 activities
DNA methyltransferase inhibitor 5-aza-CdR enhances the radiosensitivity of gastric cancer cells.
An Effective Concentration of 5-Aza-CdR to Induce Cell Death and Apoptosis in Human Pancreatic Cancer Cell Line through Reactivating RASSF1A and Up-Regulation of Bax Genes
Since the pain response is often seen prior to the first repeat radiograph, early pain response may serve as a surrogate for tumor response or radiosensitivity in these patients.
The Efficacy of Conventionally Fractionated Radiation in the Management of Osseous Metastases from Metastatic Renal Cell Carcinoma
We hold the view that the radiosensitivity of MSCs may depend to a large extent on several factors, such as the derivation of MSCs (bone or mesenchymal tissue), radiation resource (X-ray, [gamma]-ray, or UV), dosage and dose rate, biological status of the cell at the time of IR, and the detection time (early or late).
Radiation Induces Apoptosis and Osteogenic Impairment through miR-22-Mediated Intracellular Oxidative Stress in Bone Marrow Mesenchymal Stem Cells