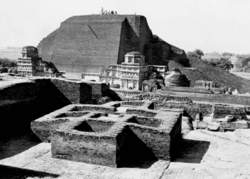 The 2,000-year-old Buddhist university of Nalanda lies near the ancient Indian city of Rajgir, one of the first places Gautama Buddha taught after his enlightenment in Bodhgaya. Getty Images.

Rajgir, the ancient capital city of the Magadha kingdom, was among the first spots visited by Gautama Buddha as he began to spread the teachings of his new religion. It is only some 20 miles from Bodhgaya, where he attained enlightenment. Among the converts during the Buddha’s 12-year stay was King Bimbisara, who attended his talks on Gridhakuta Hill (Vulture Peak). Here Buddha would deliver what are termed the Wisdom Sutras (some of his first words recorded in writing). Buddha also frequently spent periods of meditation at the Jivkamaravana monastery, which was then located in a beautiful orchard. The nearby Saptaparni Caves is the site of the first Buddhist council that was called by his leading followers after the Buddha’s death. Ajatsatni, one of the Buddha’s leading disciples, received some of his ashes and built a STUPA to hold them and an adjacent monastery. That site is now a mound used as a graveyard.

Like most Buddhist centers, Rajgir suffered from the changing political and religious forces in China. The once flourishing city is today just a small town. However, as part of the global Buddhist effort to revive Buddhism in the land of its birth, Japanese Buddhists have constructed a contemporary stupa on top of Gridhakuta Hill that is known as the Shanti Stupa or Peace Pagoda.

Only ruins remain of Venuvana Vihar, the monastery constructed by King Bimbisara as a residence for Buddha.

Feedback
Flashcards & Bookmarks ?
Please log in or register to use Flashcards and Bookmarks. You can also log in with
Flashcards ?
My bookmarks ?
+ Add current page to bookmarks
References in periodicals archive ?
Summary: Rajgir (Bihar) [India], July 27 (ANI): The fifth international Dharma-Dhamma conference was inaugurated here on Saturday by Union Minister of State Kiren Rijiju in the presence of Sri Lanka's Home Minister Gamini Jaiwickrama Perera, Bhutan's Home and Culture Minister Lyonpo Sherub Gyeltshen, senior BJP leader Ram Madhav and Juna Akhada's Awadheshananda Giri Ji Maharaj.
Bihar: 5th Dharma-Dhamma conference to be held on July 27-28 in Rajgir
THE picturesque little town of Rajgir will virtually replace Patna as the seat of governance in Bihar for the next four days as chief minister Nitish Kumar will camp there to unleash a slew of sops in his home district, Nalanda.
Nitish's gifts galore for home district this New Year
Rajgir (Bihar), Feb.12 ( ANI ): External Affairs Minister Salman Khurshid hosted the first meeting of the Parliamentary Consultative Committee on External Affairs for 2013 at Rajgir on Tuesday.
MEA consultative body deliberates on India's cultural diplomacy in Rajgir
The state government has developed a new site -- Ghoda Katora -- seven kilometre from the historic city of Rajgir, to attract the tourists and the pilgrims who throng the city in large numbers throughout the year.
A brand new shooting location
Nalanda, Dec 29 (ANI): Bihar Chief Minister Nitish Kumar held a cabinet meeting with his council of ministers on Tuesday at Rajgir in Nalanda here.
Bihar cabinet meets at Buddhist Stupa in Rajgir
The Bihar chief minister has shifted for a week to the picturesque valley of Rajgir, 110 km south- east to Patna, in his native Nalanda district to ring out the outgoing year.
A working break
Nitish's weeklong Rajgir sojourn began at a time when the RSS was holding a massive congregation in the Bihar capital.
This time it's the RSS in Patna and Nitish in Rajgir
Encyclopedia browser ?
Full browser ?
CITE
Site: Follow: Share:
Open / Close