an optical system that contains a raster, that is, an array of a large number of small optical elements—such as tiny apertures, lenses, gratings, prisms, or mirrors—that are located on a common surface and act as a single optical device. Each small element of the raster optical system participates in the creation of only a single element of the image formed by the system. Raster optical systems differ in the parameters of their elements, the methods of arrangement of the elements on the common surface, and the shape of this surface. The shape may be flat, conical, cylindrical, or spherical. Multisurface raster optical systems are also used, as are three-dimensional systems, where the elements are arranged in space in a complicated fashion. Figure 1. Analyzing property of a raster optical system: the raster breaks up the image of the object into a discrete row of elementary images. In the present case, the system consists of a raster and a screen placed in the raster’s focal plane.

In the raster optical systems used most frequently in practice, the sequence of elements on the common plane has a constant period. In this case, we speak of rasters with constant spacing.

The basic properties of raster optical systems are focusing, multiplication, analysis, and integration. In focusing, the light from a point source is collected by the raster in a point, line, or three-dimensional region. The multiplying property permits multiple repetition of the same images to be obtained. The analyzing property involves the decomposition of the image into separate elementary images (Figure 1). The integrating property makes possible the reconstruction of the complete image of the object from the elementary images (Figure 2). 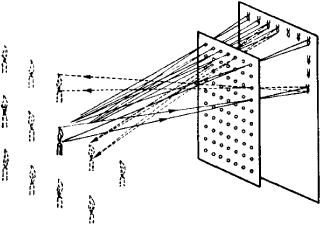 Figure 2. When the light rays from each elementary image obtained as a result of analysis pass through many adjacent raster elements, a great number of similar three-dimensional images of the object are produced. This process illustrates the integrating, or synthesizing, property of a raster optical system.