[′rāt ′jī·rə‚skōp]
(mechanical engineering)
A gyroscope that is suspended in just one gimbal whose bearings form its output axis and which is restrained by a spring; rotation of the gyroscope frame about an axis perpendicular to both spin and output axes produces precession of the gimbal within the bearings proportional to the rate of rotation.
McGraw-Hill Dictionary of Scientific & Technical Terms, 6E, Copyright © 2003 by The McGraw-Hill Companies, Inc.
The following article is from The Great Soviet Encyclopedia (1979). It might be outdated or ideologically biased.

a gyroscopic device used in finding the angular velocity of an object on which it is mounted. The most widely used type of rate gyroscope uses an astatic restrained gyroscope. In such a rate gyroscope (see Figure 1) the rotor of the gyroscope is mounted in the gimbal ring (frame). Rotation of the frame is limited by a spring, which creates a restoring moment. The natural oscillations of the gyroscope are extinguished by the damper. 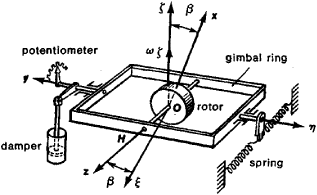 If the object is rotated around the axis Oζ (the input axis) with an angular velocity ωζ, the frame will rotate around the axis Oη (the output axis) to an angle β. The dependence of this angle on ωζ is given by the equation β = ωζH/c, where H is the moment of momentum of the gyroscope and c is a coefficient that depends on the stiffness of the spring and on the location of the point where the spring is attached. The values of β are read from the potentiometer; they define the magnitude of ωζ. The sensitivity threshold of a rate gyroscope, in terms of angular velocity of an object, is on the order of tenths of a degree per second. Some other types of rate gyroscopes, which use a floating suspension, are even more accurate.

Rate gyroscopes are used in aircraft as turn indicators and sensing elements in automatic stabilization systems and on ships in roll-and-pitch dampers and other systems. They may also be used in inertial navigation systems.

Devices that simultaneously determine both the angular velocity and the angular acceleration of an object also exist. Such devices are called rate gyroscope-accelerometers; they utilize an astatic gyroscope with three degrees of freedom. Devices of this type are used, for example, in aircraft autopilots.

Feedback
Flashcards & Bookmarks ?
Please log in or register to use Flashcards and Bookmarks. You can also log in with
Flashcards ?
My bookmarks ?
+ Add current page to bookmarks
Mentioned in ?
References in periodicals archive ?
The MEMS gyroscopes, an alternative to the conventional rate gyroscope based on a high speed rotor supported in gimbals, can be used to measure the spacecraft angular rate with respect to an inertial reference frame [1, 2].
Fuzzy modeling and compensation of scale factor for MEMS gyroscope/MEMS giroskopu neraiskusis modeliavimas ir mastelio faktoriaus ivertinimas
The basic operating element of a MEMS rate gyroscope is a flexing piezoelelectric beam coupled to a sensing element.
Use of inertial sensors in lower-limb rehabilitation device
When the new company first made its home in Waltham, Mass., in 1951, it designed a subminiature rate gyroscope that Timex eventually made and marketed.
'The Bill Gates of his time' dies at 89
Army Communications-Electronics Command's Logistics and Readiness Center Field Office at Tobyhanna, and Louis Fornicola, Aircraft Programs branch chief at the LRC, Fort Monmouth, N.J., developed and implemented a method that more quickly and economically repairs the stabilator amplifier's pitch rate gyroscope.
With the new process, ASE Division technicians send the stab amp's pitch rate gyroscope to their counterparts in the Air Communications/ Instrument Division for testing.
Teamwork stabilizes Black Hawk flights
Shkel, "Micromachined rate gyroscope architecture with ultra-high quality factor and improved mode ordering," Sensors and Actuators A: Physical, vol.
Frequency tuning of work modes in Z-axis dual-mass silicon microgyroscope
Systron Donner has developed a piezoelectric quartz rate gyroscope that has tuning forks as drive and pickup units.
Navigating with gyroscopes and GPS
Clark, Micromachined vibratory rate gyroscopes [Ph.
Research on nonlinear dynamics of drive mode in Z-axis silicon microgyroscope
The Inertia-Link wireless inertial sensor suite from MicroStrain, Inc., includes three orthogonal rate gyroscopes, three orthogonal accelerometers, a microprocessor, data logger, and RF transceiver.
Wireless orientation sensor
Positional control of the telescope comes by way of rate gyroscopes for rough fixes, star trackers for tighter orientation, and interferometric fine guidance systems for finding and tracking, nebulae, white dwarfs, and other interstellar objects.
SPACE TELESCOPE GETS ITS BEARINGS
where q is the attitude quaternion [[omega].sub.x], [[omega].sub.y], and [[omega].sub.z] represent angular rate measurements in the sensor frame obtained using the rate gyroscopes. Quaternion is used to represent attitude in the filter design because it does not have the singularity problem associated with Euler angles.
Low-cost MEMS-based pedestrian navigation technique for GPS-denied areas