a restructuring of the atomic skeleton of molecules or a change in the position of functional groups. An example of molecular rearrangement is the conversion of cyclobutene upon heating to the more stable butadiene:

In olefins, a shift of a terminal double bond toward the middle of the carbon chain often takes place upon action of acids:

The major reaction that takes place when pinacol (I) is heated with dilute mineral acids or acid salts is the elimination of water to yield 2,3-dimethylbutadiene-l,3 (II); however, a small amount of pinacolone (III), a ketone with a different carbon skeleton than that of pinacol, is also formed. Pinacolone is exclusively formed when pinacol is treated with concentrated H2SO4, or ZnCl2: 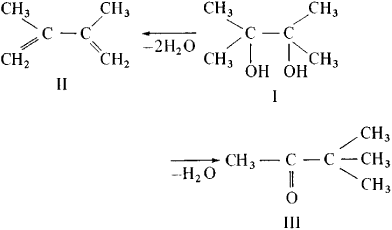