a measuring instrument in which a record of readings is provided in the form of a graph. Recording instruments are used for registering one or more physical quantities, such as voltage, current, resistance, force, temperature, humidity, displacement, or consumption, as functions of time or (less frequently) other physical quantities. 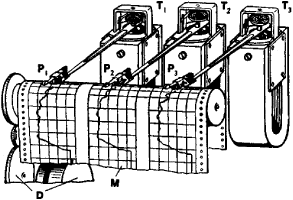 There are many different systems of recording instruments, and they vary in their recording means, mechanism, design, and number of parameters recorded (Figures 1 and 2). The most familiar are the recording voltmeters, wattmeters, and automatic potentiometers, light-beam oscillographs, thermographs, and barographs. With the development of digital methods of measurement and the use of computers to process the results thus obtained, preference is being given to digital recording instruments with measurement transducers that convert electrical and nonelectrical quantities into information that is presented in digital form. Both permanent (panel-type) and portable recording instruments are manufactured.

Recording instruments are used when it is necessary not only to know the individual values of a measured quantity, but also to follow the variation in the quantity with time or as a function of other physical quantities. With such a recording it is possible to make a judgment about the evolution of a phenomenon under 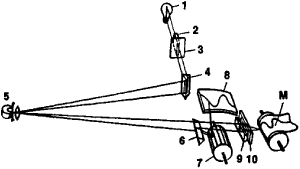 study, the progress of a production process, the operation of multi-unit machines that are being monitored, or the actions of personnel tending such machines.