[ri′dü·sər]
(biology)
decomposer
(chemistry)
reducing agent
(design engineering)
A fitting having a larger size at one end than at the other and threaded inside, unless specifically flanged or for some special joint.
(graphic arts)
A solution capable of dissolving silver; used to cut down the contrast or density of a negative or positive image.
McGraw-Hill Dictionary of Scientific & Technical Terms, 6E, Copyright © 2003 by The McGraw-Hill Companies, Inc.
The following article is from The Great Soviet Encyclopedia (1979). It might be outdated or ideologically biased.

(1) A mechanism in machine drives serving to reduce the angular velocity of the driven shaft in order to increase the torque. Reducers are used in gear and chain drives and in drives involving worm gears. They also find use in various combinations, such as worm-and-gear drives and chain-and-gear drives. Combined drives exist in which reducers are combined with variable-speed drives. Reducers are used in transport, hoisting, and processing machinery.

(2) A device for lowering and maintaining a constant pressure of a working medium (gas, steam, or liquid) at the outlet of a high-pressure container. The reducer simultaneously serves as a safety and cutoff valve. Reducers are used in gas welders, in saturators, and in water chlorinators. They are also used in various apparatus for carrying out such secondary operations as mixing, preheating, and cooling. 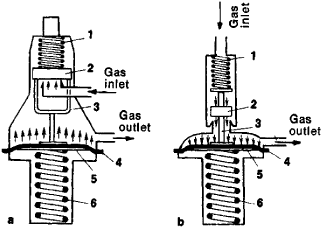 The basic element of a reducer (Figure 1) is the reducing valve, which is connected to a flat, flexible diaphragm. A spiral spring acts against one side of the diaphragm, and the pressure of the gas or liquid acts against the other. Forward reducers, in which the spiral spring acts in the same direction as the pressure (Figure 1,a), are distinguished from reverse reducers, in which the spring and pressure act in opposite directions (Figure 1,b). Depending on the working medium for which the reducer is designed, reducers are called oxygen, acetylene, or hydrogen reducers. Reducers are designed with either one or two chambers so as to effect, respectively, one-step or two-step reduction in pressure.

reducer, 2
1. A thinner or solvent; used to lower the viscosity of a paint, varnish, or lacquer.
2. A reducing pipe.
3. A reducing valve.
McGraw-Hill Dictionary of Architecture and Construction. Copyright © 2003 by McGraw-Hill Companies, Inc.

Feedback
Flashcards & Bookmarks ?
Please log in or register to use Flashcards and Bookmarks. You can also log in with
Flashcards ?
My bookmarks ?
+ Add current page to bookmarks
Mentioned in ?
References in periodicals archive ?
SSI's primary reducers use an open cutting table and large diameter cutters.
Slow and steady: the slow-speed, high-torque design of primary reduction equipment can help some recyclers process diverse material streams
The Reducer is CE-marked in the European Union for the treatment of refractory angina, a painful and debilitating condition that occurs when the coronary arteries deliver an inadequate supply of blood to the heart muscle, despite treatment with standard revascularization or cardiac drug therapies.
The European Society of Cardiology Includes Neovasc Reducer for the Treatment of Refractory Angina in the European Practice Guidelines
In conjunction, the placement of the Reducer is performed using a minimally invasive transvenous procedure that is similar to implanting a coronary stent and is completed in approximately 20 minutes, concluded the company.
Neovasc awarded US FDA's breakthrough device designation for the Neovasc Reducer
Sealing: One of the lowest-cost components of a gear reducer, which nevertheless serves a critical function, is the shaft seal.
Critical Components Of A Washdown Gear Reducer
This report on Fat Replacers and Salt Reducer Market also offers competition assessment tools such as market positioning of key players, attractive investment proposition, and Porter's Five Forces model to give the readers a view of the competitive scenario of the Fat Replacers and Salt Reducer Market.
Fat Replacers and Salt Reducer Market Size, Share, And Growth Analysis, Industry Forecast To 2025 BY
Also, it will often require modification to the gun in making a suitable opening or cavity in the buttstock to house the recoil reducer. If not done properly, this could lead to damage to the stock.
Recoil reducers
Previous research indicates that a certain microstructure of the drag reducer has positive effects on the drag reduction performance; however, the relationship between the drag reduction mechanism and the microstructure of the drag reducer has not been well studied.
Impact of the Microstructure of Polymer Drag Reducer on Slick-Water Fracturing
The Baldor Dodge MagnaGear XTR, engineered with Baldor Dodge proven planetary and helical gear technology, is the ultimate advancement in speed reducers. The reducers' simple power-dense design offers torque ratings from 100,000 to 3,500,000 in.-lb., assuring increased reliability in a more compact, economical, heavy-duty package.
Baldor Dodge offers MagnaGear XTR speed reducer
Screw conveyor drive options feature a Unicase reducer housing, Quadrilip reducer shaft sealing and high capacity output bearings with CEMA standard flange mounting and CEMA drive shafts ranging from 1.5 in.
Screw conveyor drive
Febreze Allergen Reducer is available in both Fabric Refresher and Air Effects varieties.
Febreze takes on task of cutting Allergens
* A sturdy, concentric grip of the driven shaft on both sides of the reducer.
Premium sealing system
The company's other popular item is the PG-series planetary gear reducer featuring high positioning accuracy, high torque, low backlash, low noise and high efficiency, and high compatibility with most servo motors.
SunUs tech launches twin electrical preload systems