a phenomenon exhibited when light (optical radiation) is incident on the interface of one medium with a second medium; the interaction of the light with the material of the second medium results in the appearance of a light wave that is propagated from the interface back into the first medium. At least the first medium here must be transparent to the incident and reflected radiation. Bodies that are not self-luminous become visible as a result of the reflection of light from their surfaces.

The spatial intensity distribution of reflected light is determined by the ratio of the dimensions of surface (interface) to the wavelength λ of the incident radiation. If the irregularities are small in comparison with λ, specular, or regular, reflection of light occurs. When the dimensions of the irregularities are commensurate with or exceed λ—as in the case of rough surfaces and mat surfaces—and the distribution of the irregularities is disordered, the reflection of light is diffuse. Mixed reflection of light, in which part of the incident radiation is reflected specularly and part diffusely is also possible. If irregularities with dimensions of approximately λ or greater are distributed in an orderly manner, the distribution of reflected light has a special character close to that observed when light is reflected from a diffraction grating. The reflection of light is closely connected with refraction phenomena, which occur when the reflecting medium is completely or incompletely transparent, and with absorption phenomena, which occur when the medium is incompletely transparent or is opaque. 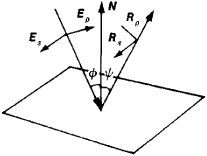 Figure 1. Specular reflection of light: (N) normal to the reflecting surface (interface), (φ) angle between the incident ray and the normal (angle of incidence), (Ψ) angle between the reflected ray and the normal (angle of reflection); φ = Ψ. (Ep), (Rp), (Rs), and (Rs) amplitude components of the electric vectors of the incident and reflected waves with vibrations lying, respectively, in and perpendicular to the plane of incidence. The arrows indicate selected positive directions of vibration amplitudes. 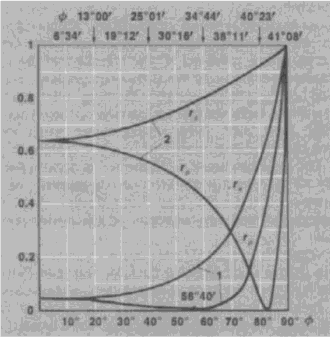 polarized perpendicular to the plane of incidence, and the ρ component of the incident light is completely refracted into the reflecting medium. If this medium strongly absorbs light, the refracted ρ component traverses a very short path in the medium. This characteristic of specular reflection is made use of in a number of polarization devices. For φ greater than the Brewster angle, the reflection coefficient for dielectrics increases with φ toward a limit of 1, regardless of the polarization of the incident light.

In general, in specular reflection, as is clear from Fresnel’s equations, the phase of the reflected light changes discontinuously. At normal incidence to the interface (φ = 0), the phase of the reflected wave is shifted by π when n2 > n1, and it remains unchanged when n2 < n1. The phase shift during reflection when φ ≠ 0 may differ for the ρ and s components of the incident light, depending on whether φ is greater or less than the Brewster angle and also on the ratio of n2 and n1.

Reflection from the surface of an optically less dense medium (n2 < n1) when sin φ ≥ sin n2/n1 is total internal reflection, in which all the energy of the incident beam of rays is returned to the first medium. Specular reflection from surfaces of strongly reflecting media, such as metals, is described by equations similar to the Fresnel formulas with the extremely important difference that n2 becomes a complex quantity whose imaginary part characterizes the absorption of the incident light. Absorption in a reflecting medium results in the absence of a Brewster angle and in values of the reflection coefficient higher than for dielectrics. Even at normal incidence the coefficient may exceed 90 percent—thus the extensive use of smooth metallic and metal-plated surfaces in mirrors.

The polarization characteristics of light waves reflected from an absorbing medium also differ—as a result of other phase shifts of the ρ and s components of the incident waves. The character of the polarization of reflected light is so sensitive to the parameters of the reflecting medium that many optical methods used to investigate metals are based on this phenomenon.

Diffuse reflection. Diffuse reflection of light is the scattering of light in all directions by the uneven surface of the second medium. The spatial distribution and intensity of the reflected radiation flux differ in each specific case and are determined by the relation between λ and the dimensions of the irregularities, by the distribution of the irregularities over the surface, by the conditions of illumination, and by the properties of the reflecting medium. The limiting case of the spatial distribution of diffusely reflected light is not strictly realized in nature and is described by Lambert’s law. Diffuse reflection of light is also observed from media whose internal structure is inhomogeneous. Such a structure results in the scattering of light within the medium and in the return of part of the light to the first medium. The regularities of the diffuse reflection of light from such media are determined by the character of the processes of single and multiple scattering of light within the media. Both the absorption and the scattering of light may display a strong dependence on λ. A consequence of this fact is alteration of the spectral composition of diffusely reflected light, which, for illumination by white light, is visually perceived as the coloring of bodies.

Feedback
Flashcards & Bookmarks ?
Please log in or register to use Flashcards and Bookmarks. You can also log in with
Flashcards ?
My bookmarks ?
+ Add current page to bookmarks
Mentioned in ?
References in periodicals archive ?
We may consider as reflection of light the passing of laws extending maternity leave of working mothers, and ensuring the health of mothers and infants in a span of a thousand days.
Steady governance
So it could be a reflection of light, especially if taking a photo through a window."
UFO Spotted Flying Over South African City By Conspiracy Theorist
From glaze (pure sheen), sparkle (dazzling, glittery shine) to mirror (bold and metallic radiance), "The Dior Addict woman literally projects her positive addiction to life through a reflection of light and color," as Philips puts it.
Pink Addiction
"The Dior Addict woman literally projects her positive addiction to life through a reflection of light and color," says Dior Makeup creative and image director Peter Philips.
Pink, it's my new obsession
"Inspired by the works of Antoni Gaudi, Mi 9 beautifully combines the reflection of light, seamless curves, and the use of natural elements to create a masterpiece of art", says Carlos Canals Roura, President of The Gaudi Academia of Knowledge.
Xiaomi Mi 9 and Redmi Note 7 available in the UAE
[USPRwire, Thu Mar 07 2019] Optical Coherence Tomography (OCT) is an imagining technique that incorporates the reflection of light to generate the image of the interior parts of the body that require imagining.
Cardiovascular OCT Imaging Market: Value Chain, Dynamics and Key Players 2018-2028
These are equipped with anti-reflective coating (AR) which eliminates the reflection of light. Some anti-glare screen protectors also provide anti-fingerprint covering.
Smartphone Screen Protector Market: An Insight On the Important Factors and Trends Influencing the M
Even when viewing the sliding doors to the bedrooms and studio during the day from the public space, the reflection of light did not allow visibility into those private spaces.
An Eichler-inspired mid-century granny flat
The air pressure, for example, the resonance of sound, the reflection of light and faces and the fast passage of time.
I Have the Right to Be a Stranger
"A brief reflection of light during filming caused an illusion and some players to think there were two numbers on ball 38.
Mystery of lotto ball's '2 numbers' Game bosses 'shine a light' on draw concern
The Geo design is intended to imitate bending and moving reflections of vertical depths through the reflection of light on fragmented surfaces.
Differentiating Consumer Electronics with Textured Coatings
The speed of the horse, lightness in jumping, and the reflection of light on its dark coat leaves those that love horses in awe.
ET Photography: the man with the horse