a device used to remove heat from an object that is to be cooled to a temperature below the environmental temperature. Refrigerating machines are used to obtain temperatures ranging from 10°C to –150°C. The temperature range below –150°C is the subject of cryogenic engineering.

The operation of refrigerating machines is based on the principle of a heat pump; that is, such machines remove heat from an object to be cooled and, by expending energy (for example, mechanical or thermal energy), transfer the heat to a cooling medium—usually water or ambient air—that has a higher temperature than the object to be cooled. The operation is characterized by the refrigerating capacity, which, for present-day machines, ranges from several hundred watts to a few megawatts.

The first refrigerating machines appeared in the middle of the 19th century. One of the oldest such machines is the absorption machine, whose invention and design are associated with J. Leslie (Great Britain, 1810), F. Carré (France, 1850), and F. Windhausen (Germany, 1878). The first vapor-compression machine, which operated on ether, was built by J. Perkins (Great Britain, 1834). Similar machines, which used methyl ether or sulfur dioxide as the refrigerant, were developed later. In 1874, K. Linde (Germany) constructed an ammonia vapor-compression refrigerating machine, which marked the beginning of refrigerating-machine building.

Vapor-compression machines are the most widely used and most versatile refrigerating machines. The main components of such machines (Figure 1) are an evaporator, a refrigeration compressor, a condenser, and an expansion valve. The components, all of which should be well sealed, are connected by piping provided with shutoff, control, and safety equipment. According to the type of compressor used, vapor-compression refrigerating machines are classified as reciprocating, turbine, rotary, or screw-type machines.

In a vapor-compression refrigerating machine, the refrigerant circulates in a closed cycle. In the evaporator, the refrigerant boils at a low pressure p0 and a low temperature. The heat required for boiling is removed from the object to be cooled, thus reducing the temperature of the object to the boiling point of the refrigerant. The vapor formed is drawn into the compressor, is compressed to the condensation pressure pc, and then passes into the condenser, where it is cooled by water or air. Owing to the removal of heat in the condenser, the vapor condenses. The liquid refrigerant thus obtained passes through the expansion valve, where its temperature and pressure are reduced, and returns to the evaporator to be evaporated again, thereby completing the machine’s refrigeration cycle.

An absorption refrigerating machine (Figure 2) consists of a boiler, a condenser, an evaporator, an absorber, a pump, and an expansion valve. The working fluid is a binary solution in which the two components have different boiling points at the same pressure. The component with the lower boiling point is the refrigerant; the second component is called the absorbent. In the temperature range from 0°C to –45°C, absorption machines are used in which the working fluid is a solution of ammonia (the refrigerant) and water. At cooling temperatures above 0°C, absorption machines that operate on a solution of water (the refrigerant) and lithium bromide are mainly used. 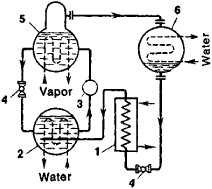 In the evaporator of an absorption refrigerating machine, the refrigerant is evaporated by heat removed from the object to be cooled. The vapor thus produced is absorbed in the absorber. The strong solution formed in the absorber is pumped into the boiler, where the refrigerant is vaporized by thermal energy from an external source, and the remaining solution is returned to the absorber. The refrigerant vapor then flows from the boiler to the condenser, where it is condensed; the resulting liquid passes through the expansion valve and to the evaporator, where it evaporates a second time.

The use of absorption machines is very advantageous in industrial enterprises that have secondary energy resources, such as spent steam, hot water, or flue gases from industrial furnaces. Absorption refrigerating machines may be of the single-stage or the two-stage type.

Steam-jet refrigerating machines (Figure 3) consist of an ejector, an evaporator, a condenser, a pump, and an expansion valve. The refrigerant is water, and the energy source is steam at a pressure of 0.3–1 meganewton per m2 (3–10 kilograms-force per cm2). The steam enters the ejector nozzle, where it is expanded. As a result, the pressure in the ejector and, therefore, in the evaporator of the machine is reduced to a value that corresponds to a boiling point of water of somewhat above 0°C, usually of the order of 5°C. Owing to partial evaporation, the water that is circulated to the cooling load is chilled in the evaporator. The water vapor drawn from the evaporator and the motive steam from the ejector pass into the condenser, where they become liquid water and give up heat to a cooling medium. Some of the water from the condenser is pumped into the evaporator to replenish the supply of chilled water. 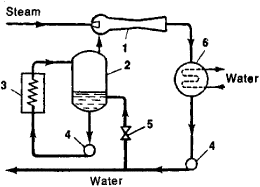 Feedback
Flashcards & Bookmarks ?
Please log in or register to use Flashcards and Bookmarks. You can also log in with
Flashcards ?
My bookmarks ?
+ Add current page to bookmarks
TheFreeDictionary presents:
Write what you mean clearly and correctly.
Mentioned in ?
References in periodicals archive ?
In summer season, absorption refrigerating machine and hot water driven absorption work to create chilled water.
An application of energy conservation measures to a middle-sized factory using energy management system
It is called High-efficiency Centrifugal Refrigerating Machine; it generates cold water for air conditioning.
Tokyo Skytree Tower, a technological marvel
Rozhentsev [11] investigated a low-temperature Joule-Thomson refrigerating machine, using a nonazeotropic mixture of refrigerants.
Low charge transport refrigerator (I). Refrigerant charge and strategies of charge reduction/Mazos dozes transportinis saldytuvas (I). Saldymo agento doze ir dozes sumazinimo strategijos
In 1896, he built a refrigerating machine (said to be the largest in the world) for Armour & Co.
Engineer's genius launched diverse Frick line
"Indirect condensing pressure limitation of a refrigerating machine by evaporator superheating variation control" (in Italian).
Electronic expansion valves vs. thermal expansion valves
1922: Carrier develops a new coolant and a centrifugal refrigerating machine that enables the cooling of public spaces, changing the face of urban architecture.
Carrier to expand UAE operations
His experiments with ether, which was used by printers for cleaning type, led to his producing a practical refrigerating machine that used a vacuum pump to assist its evaporation.
Shipboard refrigeration and the beginnings of the frozen meat trade
(NYC Rules and Regulations Title 3 Fire Department, Chapter 33 Refrigeration, III 33-03 "Qualified Refrigerating Machine Operator Requirements").
Updating the building code to save energy
Within two years John Gorrie constructed a machine to provide refrigerated air - an air cycle refrigerating machine. Basically, his machine compressed air, cooled it, then expanded it to drive an engine (which helped compress the air).
Was Ice making John Gorrie's greatest legacy?