[ri‚frij·ə′rā·shən ‚sī·kəl]
(thermodynamics)
A sequence of thermodynamic processes whereby heat is withdrawn from a cold body and expelled to a hot body.
McGraw-Hill Dictionary of Scientific & Technical Terms, 6E, Copyright © 2003 by The McGraw-Hill Companies, Inc.
The following article is from The Great Soviet Encyclopedia (1979). It might be outdated or ideologically biased.

a reverse thermodynamic cycle whereby heat is transferred from a body with a lower temperature to a body with a higher temperature owing to the expenditure of work. Refrigeration cycles are used in refrigerating machines and in gas refrigerators. The most widely used refrigeration cycles are based on the evaporation of a liquid, the Joule-Thomson effect, or the expansion of a working fluid in an expansion valve. Such cycles make it possible to obtain temperatures of as low as approximately 0.3°K.

One of the most efficient refrigeration cycles is the reverse Carnot cycle, which is approximated by the refrigeration cycle of an ideal vapor-compression refrigerating machine, as shown in Figure 1. The ideal vapor-compression cycle consists of two adiabatic processes (1–2 and 3–4) and two isothermal processes (2–3 and 4–1). In this cycle, a liquid refrigerant boils in the evaporator of the refrigerating machine (process 4–1) at a temperature of T0 and a pressure of p0 owing to the heat of the medium to be cooled. The refrigerant vapor is drawn into a compressor, undergoes adiabatic—that is, constant-entropy—compression to a pressure of pc and a temperature of Tc (process 1–2), and enters a condenser, where it is condensed (process 2–3) with the pressure and temperature unchanged. The heat of condensation is removed by a liquid coolant or by air. The liquid refrigerant obtained in process 2–3 returns to the evaporator through an expansion valve, in which the pressure and temperature are adiabatically reduced (process 3–4) to the initial values of p0 and T0. Process 3–4 is accompanied by partial evaporation of the refrigerant. 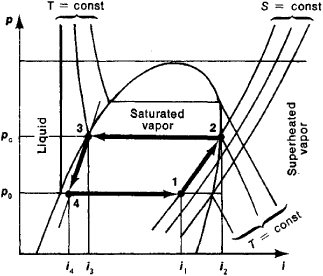 In a real vapor-compression refrigerating machine, as opposed to an ideal machine, the refrigeration cycle entails the superheating of the vapor during compression. In addition, a throttling valve replaces the expansion valve, so that the expansion of the refrigerant is isenthalpic rather than adiabatic. As a result, the coefficient of performance is reduced.

The refrigeration cycle used in dense-air refrigerating machines consists of two adiabatic and two isobaric processes. In the dense-air cycle, the refrigerant (air) is drawn by a compressor from the space to be cooled. The air is adiabatically compressed, passes through a cooler, and is adiabatically expanded in an expansion engine. At a temperature of –70°C or lower, the air enters the space to be cooled, and the cycle is repeated.

A more efficient cycle is the reverse Stirling cycle, which consists of two isothermal and two isochoric processes. This cycle is used in the Philips gas refrigerators and makes it possible to obtain cryogenic temperatures.

A sequence of thermodynamic processes whereby heat is withdrawn from a cold body and expelled to a hot body. Theoretical thermodynamic cycles consist of nondissipative and frictionless processes. For this reason, a thermodynamic cycle can be operated in the forward direction to produce mechanical power from heat energy, or it can be operated in the reverse direction to produce heat energy from mechanical power. The reversed cycle is used primarily for the cooling effect that it produces during a portion of the cycle and so is called a refrigeration cycle. It may also be used for the heating effect, as in the comfort warming of space during the cold season of the year. See Heat pump, Thermodynamic processes

There are many methods by which cooling can be produced. The methods include the noncyclic melting of ice, or the evaporation of volatile liquids, as in local anesthetics; the Joule-Thomson effect, which is used to liquefy gases; the reverse Peltier effect, which produces heat flow from the cold to the hot junction of a bimetallic thermocouple when an external emf is imposed; and the paramagnetic effect, which is used to reach extremely low temperatures. However, large-scale refrigeration or cooling, in general, calls for mechanical refrigeration acting in a closed system. See Refrigeration

The purpose of a refrigerator is to extract as much heat from the cold body as possible with the expenditure of as little work as possible. The yardstick in measuring the performance of a refrigeration cycle is the coefficient of performance, defined as the ratio of the heat removed to the work expended. The coefficient of performance of the reverse Carnot cycle is the maximum obtainable for stated temperatures of source and sink. See Carnot cycle

The reverse Brayton cycle it was one of the first cycles used for mechanical refrigeration. Before Freon and other condensable fluids were developed for the vapor-compression cycle, refrigerators operated on the Brayton cycle, using air as their working substance. Air undergoes isentropic compression, followed by reversible constant-pressure cooling. The high-pressure air next expands reversibly in the engine and exhausts at low temperature. The cooled air passes through the cold storage chamber, picks up heat at constant pressure, and finally returns to the suction side of the compressor. See Brayton cycle

A repetitive sequence of thermodynamic processes in which a refrigerant absorbs heat from a controlled space at relatively low temperature; then the heat is rejected elsewhere at a higher temperature, and the process is repeated.
McGraw-Hill Dictionary of Architecture and Construction. Copyright © 2003 by McGraw-Hill Companies, Inc.

Feedback
Flashcards & Bookmarks ?
Please log in or register to use Flashcards and Bookmarks. You can also log in with
Flashcards ?
My bookmarks ?
+ Add current page to bookmarks
Mentioned in ?
References in periodicals archive ?
A final chapter cites examples of application: integrating a heat pump into the heat supply system of a cheese production plant, using intensified heat exchangers to improve energy efficiency in phosphoric acid production, and the heat integration of ammonia refrigeration cycle into buildings' heating system.
Compact Heat Exchangers for Energy Transfer Intensification: Low Grade Heat and Fouling Mitigation
Analysis of the Einstein refrigeration cycle. Master's thesis, Georgia Institute of Technology.
The Einstein-Szilard refrigerator: an experimental exploration
If the temperature of circulating water meets the purpose, it will be directly uses without a refrigeration cycle. These usages may include radiant cooling and heat recovery from drainage, for instance.
Development of a Renewable Ground-Loop (ReGL) System
“It dawned on me that there must be a way to harness all the energy from the sun to reverse the thermal flow, possibly powering a refrigeration cycle.” In addition to Solar Cool Technologies'[TM] 'green' efforts, every purchase of a consumer SolarCooler[TM] will donate a portion of its sale towards providing SolarCooler's[TM] for vaccine transportation to under-developed regions of the world.
First Solar-Powered Cooler Launches at CES
In addition, since the [CO.sub.2] cycle operated under a typical air-cooled operating condition is a so-called transcritical refrigeration cycle, the expansion process of the [CO.sub.2] cycle proceeds from super-critical condition to two-phase.
Performance of vane-type [CO.sub.2] expander and characteristics of transcritical expansion process
The Systematic Trouble Shooting technique calls for analyzing each of the four refrigeration cycle components individually to reach a reasoned diagnosis.
Rooftop Refrigeration Unit Performance
The absorption refrigeration cycle has the following components in common with the vapor compression cycle, evaporator, expansion valve, and condenser (Figure 2).
Data center trigeneration with absorption refrigeration and economizer technologies
The expansion valve serves as the control device that maintains the low evaporating pressure in the refrigeration cycle. If an expander is replaced with an expansion valve, it is not only able to recover the expansion loss, but also is able to provide a function of an expansion valve.
Axial and radial force control for a [CO.sub.2] scroll expander
One reason for the low gas density is that the whole refrigeration cycle operates under a fairly hard vacuum.
Sparkling water
The behavior of two-stage compound compression refrigeration cycle with flash intercooling, using refrigerant R-22, by exergy method was investigated (Nikolaidis and Probert 1998).
An absorption chiller system using lithium bromide and water as working fluids: exergy analysis