(also household refrigerator), an appliance that is used for the short-term preservation of food products in the home by means of refrigeration. Depending on the type of refrigerating machine used, domestic refrigerators are classified as compression-type, absorption-type, and thermoelectric. 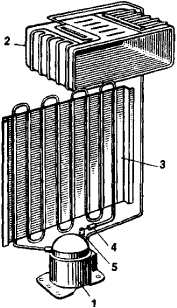