(rē'jēōmŏn'tā`nəs) [Lat.,=belonging to the royal mountain, i.e., to Königsberg], 1436–76, German astronomer and mathematician, b. Königsberg. His original name was Johannes Müller. In 1461 he went to Rome with Cardinal Bessarion and learned Greek in order to translate Greek writings. In 1468 he was called to the court of the king of Hungary to make a collection of Greek manuscripts, and three years later he settled at Nuremberg, where, with his pupil and patron, Bernhard Walther, he established an observatory and a printing press. Among other works they published the Ephemerides for the years 1474–1506, calculated by Regiomontanus, and Georg von Purbach's Theoricae planetarum novae. Summoned by Pope Sixtus IV, Regiomontanus went to Rome in 1475 to assist in reforming the calendar and was made bishop of Regensburg. He died in Rome. He made improved instruments, both mathematical and astronomical, introduced algebra into Germany, and did much to further trigonometry.
The Columbia Electronic Encyclopedia™ Copyright © 2013, Columbia University Press. Licensed from Columbia University Press. All rights reserved. www.cc.columbia.edu/cu/cup/ 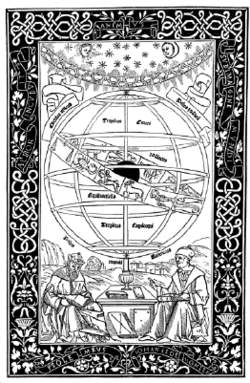 Regiomontanus (born Johann Müller), a German astronomer and astrologer, was born on June 6, 1436, in Königsberg, Germany. He established an observatory at Nuremberg, where he observed Halley’s comet. Regiomontanus also published ephemerides (tables of planetary positions) that were used by, among other people, Christopher Columbus. He was brought to Rome by Pope Sixtus IV to help devise the calendar. Regiomontanus was also the translator of Ptolemy’s Almagest. He died in Rome on July 6, 1476. He is best remembered by astrologers for the system of house division that bears his name.

(pseudonym of Johann Müller). Born June 6, 1436, in Königsberg, Franconia (then a part of Germany); died July 6, 1476, in Rome. German astronomer and mathematician. Student of G. Purbach.

Regiomontanus lived in Italy from 1461 to 1468, studying the works of the Greek mathematicians and astronomers. From 1468 to 1471 he was a professor at the University of Vienna. In 1471 he settled in Nuremberg, where an astronomical observatory, a workshop for the construction of astronomical instruments, and a printing press were built for him. In 1475 he moved to Rome at the invitation of the pope to participate in research on calendar reform.

Feedback
Flashcards & Bookmarks ?
Please log in or register to use Flashcards and Bookmarks. You can also log in with
Flashcards ?
My bookmarks ?
+ Add current page to bookmarks
Mentioned in ?
References in periodicals archive ?
(4) Regiomontanus J., Joannis Regiomontani Opera Collectanea, F.
Historical annular solar eclipses
In 1462 in Rome, German astronomer Regiomontanus gave his patron Cardinal Bessarion an astrolabe with an engraving and epigram holding a complex of secret messages.
Astrolabes and angels, epigrams and enigmas; from Regiomontanus' acrostic for Cardinal Bessarion to Piero della Francesca's Flagellation of Christ. (CD-ROM included)
Regiomontanus' optimisation problem can be phrased as follows: at what point on the earth's surface would a vertically suspended bar appear longest?
Problem solving in calculus with symbolic geometry and CAS
Twelve articles consider the reception of Euclid in the Latin West from the 12th century to about 1500, and the contributions of Johannes Regiomontanus (1436-76) to Western mathematics.
The development of mathematics in medieval Europe; the Arabs, Euclid, Regiomontanus
Our first example is from Regiomontanus, author of De Triangulis, whose real name was Johann Muller of Konigsberg (1436-1476)--an important mathematician of his time (Boyer, 1989, p.
How our methods of writing algebra have evolved: a thread through history
As the work of Ibn Fallus was not widely known in Europe, these numbers were rediscovered by Regiomontanus (1461), Scheybl (1555) and Cataldi (1603).
Just perfect part 2
Fired by the example of Regiomontanus (see 1472), astronomers viewed them calmly.
Comets' tails
But there was one notable exception: the crater Regiomontanus (L46 in the Lunar 100).
False volcanoes on the moon: until very recently, scientists were dead wrong about the origin of lunar craters
The nearby central peak of Regiomontanus is one clear example.
Charon's Canal: it's literally one "road" to Hell. And it'll be a sin if you miss it
Once the province of the greatest Renaissance scientists from Regiomontanus to Kepler, and penetrating to some degree all levels of the social order, it is now a fusty oddity.
Caprarola's Sala della Cosmografia
In the fifteenth century, Regiomontanus used the term lex, not only in optics but also in astronomy and mathematics, although not quite in its modern sense.(49) Nevertheless, she says, despite their ambiguity Regiomontanus's phrases became part of the scientific vocabulary and were employed by Copernicus in his Commentariolus when he referred to the "fixed laws of motion" (motuum leges) of the planets in the firmament.(50) It is a usage that, she insists, echoes ancient uses derived from the Stoic concept of the law of nature.
Inertia and scientific law in sixteenth-century commentaries on Lucretius