[‚rē‚lak′sā·shən ‚äs·ə‚lā·shənz]
(physics)
Oscillations having a sawtooth waveform in which the displacement increases to a certain value and then drops back to zero, after which the cycle is repeated.
McGraw-Hill Dictionary of Scientific & Technical Terms, 6E, Copyright © 2003 by The McGraw-Hill Companies, Inc.
The following article is from The Great Soviet Encyclopedia (1979). It might be outdated or ideologically biased.

self-maintained oscillations that arise in systems in which dissipative forces play an important role. Examples of such forces are external or internal friction in mechanical systems and resistance in electrical systems. Because these forces dissipate energy, the energy stored in one of two (or more) storage elements in such an oscillating system does not pass entirely to the other storage element, as it does in systems that perform harmonic oscillations, but is partially dissipated in the system into thermal energy. 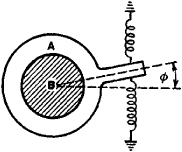 A simple example of a mechanical system that produces relaxation oscillations is a shoe that is pressed against a rotating shaft B and is held in position by springs (Figure 1). When the shaft rotates, friction causes the shoe to be pulled along by the shaft until the moment of the elastic forces of the springs becomes equal to the maximum possible moment of the frictional forces. The shoe then begins slipping along the shaft in the opposite direction. As the shoe slips, the relative velocity between the shoe and shaft increases, the frictional force decreases, and the shoe returns to its initial position. As the shoe approaches the equilibrium position, however, the elastic force of the springs decreases, and the shaft once again catches hold of the shoe and draws it along. The process is then repeated (Figure 2).

Figure 4. Graph of variation in current with time in a circuit with a gas-discharge tube: (I) current, (t) time

Feedback
Flashcards & Bookmarks ?
Please log in or register to use Flashcards and Bookmarks. You can also log in with
Flashcards ?
My bookmarks ?
+ Add current page to bookmarks
Mentioned in ?
References in periodicals archive ?
The limit cycles occurring in singularly perturbed Lienard systems are relaxation oscillations, characterized by the presence of phases in the cycle with different time scales: A phase of slow change is followed by a short phase of rapid change where the system jumps to the next stage of slow variation.
In this paper, we will extend the asymptotic analysis method of Eckhaus [10] to study the birth of relaxation oscillations in the following singularly perturbed generalized Lienard system,
Relaxation Oscillations in Singularly Perturbed Generalized Lienard Systems with Non-Generic Turning Points
Relaxation oscillations are described by two alternating processes on different time scales; a long relaxation period during which the system structure approaches an equilibrium point, exchanging with a short impulsive period in which the equilibrium point transfers.
A squat energy oscillator based readout edge with CMUT technique for medicinal applications
On the problem of control of relaxation oscillations of a "singing" flame.
One-dimensional flame instability and control of burning in fire-chamber
Here slow-fast cycle is not periodic orbit of system (2), but a limit periodic set as [epsilon] approaches 0 and the limit cycles that are close to slow-fast cycle are called relaxation oscillations. In 2007, Dumortier et al.
So there exists ([u.sub.0], [v.sub.0], [w.sub.0]) which satisfies the conditions in the third part of Theorem 1, and from conclusions of Theorem 1, we get that system (32) has three hyperbolic relaxation oscillations near canard cycle [[GAMMA].sub.UVW], where U = [F.sub.0]([u.sub.0]), V = [F.sub.0](v([u.sub.0])), W = [F.sub.0](w([u.sub.0])), [u.sub.0] [member of] (-1, 0).
On the limit cycles of a class of planar singular perturbed differential equations
When coupling is weak, the model exhibits low-frequency antiphase relaxation oscillations with each species alternatively taking the dominant role.
Awakened oscillations in coupled consumer-resource pairs
As seen in this figure, the rise time is exactly equal to the turnon delay and the time of the relaxation oscillations which is less than 20 psec.
Semiconductor quantum dot lasers as pulse sources for high bit rate data transmission
The dynamics of this so-called "spurt" regime can be described quantitatively by way of the theory of relaxation oscillations in terms of pressure and flow rate as reported by Molenaar et al.
The "sharkskin effect" in polymer extrusion
When [f.sub.m] increases beyond [f.sub.r], the electron and photon fields tend to become more and more out of phase, resulting in damping of the relaxation oscillations and reduction in the IM response.
Modeling of millimeter-wave modulation characteristics of semiconductor lasers under strong optical feedback
Van der Pol equation for relaxation oscillation. In Contribution to the theory of nonlinear oscillation II.
Analytical study of the Van Der Pol equation in the autonomous regime