The characteristic time for a distribution of electrons in a solid to approach or “relax” to equilibrium after a disturbance is removed. A familiar example is the property of electrical conductivity, in which an applied electric field generates an electron current which relaxes to an equilibrium zero current after the field is turned off. The conductivity of a material is directly proportional to this relaxation time; highly conductive materials have relatively long relaxation times. The closely related concept of a lifetime is the mean time that an electron will reside in a given quantum state before changing state as a result of collision with another particle or intrinsic excitation. This lifetime is related to equilibrium properties of the material, whereas the relaxation time relates to the thermal and electrical transport properties. The average distance that an electron travels before a collision is called the mean free path. Although typical collision times in metals are quite short (on the order of 10-14 s at room temperature), mean free paths range from about 100 atomic distances at room temperature to 106 atomic distances in pure metals near absolute zero temperature. Considering the very dense packing of atoms in a solid, these surprisingly long electron path lengths are analogous to the unlikely event that a rifle bullet might travel for miles through a dense forest without hitting a tree. The detailed explanation of the electron mean free path in metals is a major success of the modern theory of solids.

The conduction process is a steady-state balance between the accelerating force of an electric field and the decelerating friction of electron collisions which occur on the time scale of the relaxation time. This process may be described in terms of the probability distribution function for the electrons, which depends on the electron momentum (proportional to the wave vector, k , which labels the quantum state of the electrons), the position, and the time. Viewed in k -space, the entire distribution will shift from an equilibrium state under the influence of a perturbation such as an electric field (see illustration). For example, in the ground state, the collection of occupied electron states in k -space is bounded by the Fermi surface centered at the origin, while in an electric field this region is shifted. Because of electron collisions with impurities, lattice imperfections, and vibrations (also called phonons), the displaced surface may be maintained in a steady state in an electric field. These collisions also restore the equilibrium distribution after the field is turned off, and the relaxation time is determined by the rate at which the shifted distribution returns to equilibrium. Specifically, the contribution of collisions to the rate of change of the shifted distribution after the field is turned off equals the difference between the shifted and equilibrium distributions divided by the relaxation time. This statement is referred to as the relaxation-time approximation, and is a simple way of expressing the role of collisions in the maintenance of thermodynamic equilibrium. The details of the various collision mechanisms are lumped into the parameter of the relaxation time. For example, in the case of mixed scattering by impurities and phonons, the inverse of the relaxation time can be determined from the sum of collision rates as the sum of the inverses of the electron-impurity and electron-phonon scattering times. See Crystal defects, Fermi surface, Lattice vibrations, Phonon 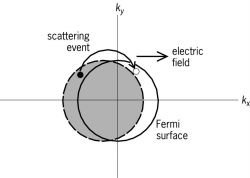 Effect of the electric field on electron distribution in a solid, viewed in k -space, where k is the electron wave vector

As compared to poorly conducting solids or insulators, an excess of so-called free electrons in a metal contributes to the long mean free paths. From a quantum mechanical standpoint, the free-electron wave function readjusts in a perfectly periodic atomic lattice to avoid the atomic ion cores and spend most of the time in the spaces between. In the analogy of the rifle fired into a forest, the bullet will not travel far, but the sound of the gunshot can, because the sound waves bend around the trees in a constructive manner. In a perfectly periodic lattice, the electron waves scatter constructively from the atomic ion cores, resulting in screening of the cores and coherent transmission of the waves over large distances. Any disturbance to the lattice periodicity tends to destroy this wave phenomenon, resulting in lower transmission or energy loss. At room temperature, the conductivity is usually limited by scattering from lattice vibrations (phonons). At lower temperatures, vibrations are greatly reduced, but the conductivity is still limited by scattering from impurities and imperfections. See Electrical resistivity, Free-electron theory of metals, Quantum mechanics

In the superconductive state, observed in many metals and certain complex compounds at sufficiently low temperatures, impurities, imperfections, and lattice vibrations become completely ineffective in retarding current flow, leading to persistent electric currents even after the driving electric field is removed. This state of resistanceless conduction is described as an ordered quantum state of pairs of electrons resulting from lattice vibrations which deform the ion core potential in such a way as to provide an attractive electron-electron interaction. The relaxation time thus becomes infinite (as nearly as can be measured), a rare macroscopic manifestation of a quantum effect. See Superconductivity