a characteristic curve having a piecewise-linear shape and corresponding to the conversion by a device (or system) of a continuous input variable x into discrete values yn of an output variable y, where η is the number of possible values or levels of the output variable; usually n is equal to 2 or 3. Thus, the curve characterizes the operation of a relay. 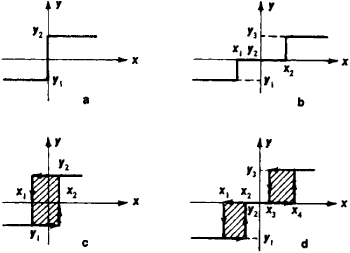 Feedback
Flashcards & Bookmarks ?
Please log in or register to use Flashcards and Bookmarks. You can also log in with
Flashcards ?
My bookmarks ?
+ Add current page to bookmarks
Mentioned in ?
References in periodicals archive ?
and this shows the dependency of distance relay characteristic to load angle, as shown in above equations.onnected to bus A.
It can be seen that, when short circuit level changes, the characteristic will be weakly constant, and this shows the dependency of distance relay characteristic to short circuit level, as shown in above equations.
EFFECT OF FACTS DEVICES ON MEASURED IMPEDANCE BY DISTANCE RELAY
In this paper, the coordination optimization problem is represented by a nonlinear relay characteristic function and a range of nonlinear coordination constraints.
Relay Characteristics. The nonlinear relay characteristics function based on standard IEEE C37.112-1996 can be stated as follows:
Applying hybrid PSO to optimize directional overcurrent relay coordination in variable network topologies
But after you look at the parts, you must combine and analyze overall relay characteristics so you can properly include one of these devices in a circuit as a whole.
Power relays: power relays give designers much to ponder