a set of devices (or an individual device) that includes relays and is able to react to a short circuit in various elements of an electrical system by automatically identifying and isolating the faulted section. In a number of cases, protective relays can react to other disturbances of the normal operating conditions of the system—for example, over-voltages or overcurrents—by actuating a signal system or, less often, by isolating the corresponding element of the system. A short circuit is the principal type of fault in electrical systems in frequency of occurrence and scale of adverse consequences. When a short circuit occurs, the voltage decreases abruptly and nonuniformly in the system, and the current in individual elements of the system increases substantially. This situation can eventually cause a power failure for consumers and damage to equipment. The use of protective relay systems helps minimize the harmful effects of a short circuit.

Figure 1 shows a diagram of a section of a radial electrical system, in which current flows to the location of a short circuit from one direction. The system is equipped with relatively selective protective relays, and the corresponding time delays are also shown in Figure 1. The protective relays 1 and 2 each have three stages, and each stage is adjusted for certain values of the input signal so that the time delay of the relays is a step function of the distance to the location of the short circuit. The extent of the zones that are protected by individual stages and the corresponding delay times are chosen so that the protective relays in the faulted sections of the system operate sooner than the other relays. The first protective-relay stage has no special time delay. The zone of this stage should be somewhat smaller than the protected section because relay 1, for example, cannot distinguish between short circuits at points S1 and S2. The last stages (the third stages in the protective relaying shown in Figure 1) are backup stages and often have no clearly defined zones. 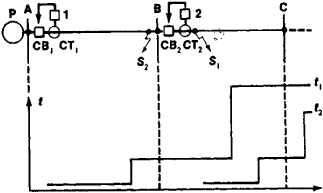 Figure 1. Diagram of a section of a radial electrical system, wherein power is supplied from one direction; the section is equipped with relatively selective protective relays. The lower part of the figure shows the time delays of the relays; the distance along the line is plotted along the axis of abscissas. (A), (B), and (C) substation buses, (CB1) and (CB2) circuit breakers, (P) power source, (CT1) and (CT2) current transformers; (1) and (2) protective relays, (S1) and (S2) locations of short circuit, (t) time delay.

In systems where current can flow to a short circuit from two directions (from different power sources or through a bypass connection) the relatively selective protective relays are directional relays, which operate only when the short-circuit power is transmitted through the protected elements in a certain direction from the buses in the nearest substation. Thus, for a short circuit at the point S (Figure 2), only relays 1, 3, 4, and 6 can operate. In order to ensure selectivity in this case, relays 1 and 3 (4 and 6) are coordinated with each other with respect to their zones and time delays.

In many cases, such as in high-power generators and transformers and in power lines at voltages of 110 kilovolts or higher, comparatively complicated absolutely selective protective relays are used to provide high-speed protective relaying. The most common approach here is longitudinal protection, wherein information is supplied to a protective relay from opposite ends of an element in order to identify a short circuit at the end of the relay’s “own” section and at the beginning of the adjacent section. Thus, a longitudinal differential system for current protection responds to the vector difference between the current vectors at the ends of an element. For an external short circuit, this difference is theoretically equal to zero; for an internal short circuit, it is equal to the current at the point of fault. Other types of protective relaying are also used. In phase comparison relaying, the phase angles of the current vectors are balanced. In directional comparison relaying, the directions of the power flow at the ends of an element are compared. Longitudinal protective relays for electrical machines and lines of up to 10 km in length receive information on changes in the electrical quantities directly through the conductors proper of the line or machine. For longer lines, such information is usually transmitted through high-frequency carrier channels along the conductors of the line; microwave channels and radio-relay links, however, are also used.